You can find the critical values for an ANOVA hypothesis using the F-table. Because the F-distribution is based on two types of degrees of freedom, there's one table for each possible value of alpha (the level of significance).

The following table shows the different values of the F-distribution corresponding to a 0.05 (5 percent) level of significance. 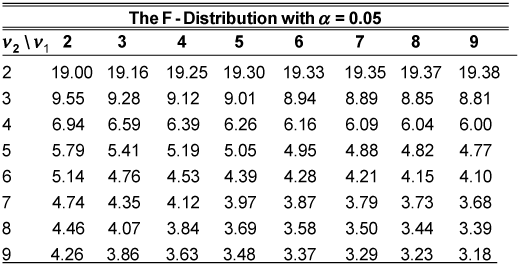 For the one-way ANOVA process, you compute the numerator and denominator degrees of freedom as follows:

For example, say you're looking for a right-tail area of 5 percent under the F-distribution with numerator degrees of freedom

and denominator degrees of freedom

The superscripts represent the numerator and denominator degrees of freedom, respectively. The subscript represents the level of significance.