How to Compute Poisson Probabilities

The Poisson distribution is useful for measuring how many events may occur during a given time horizon, such as the number of customers that enter a store during the next hour, the number of hits on a website during the next minute, and so forth. The Poisson process takes place over time instead of a series of trials; each interval of time is assumed to be independent of all other intervals.

You calculate Poisson probabilities with the following formula:

Here's what each element of this formula represents:

e is a constant that's widely used in financial applications. One of the most important uses is in computing present values of sums of money when interest rates are continuously compounded — compounded an infinite number of times. Most calculators have a key labeled ex that you can use to calculate the value of e raised to a specified power. In Excel, the appropriate function for determining the value of e is EXP.

In this case, the value of lambda

is equal to 1, because the average number of messages each hour equals 1. The probability of receiving two messages during the next hour is

Alternatively, you can get results from a Poisson table set up like this table. 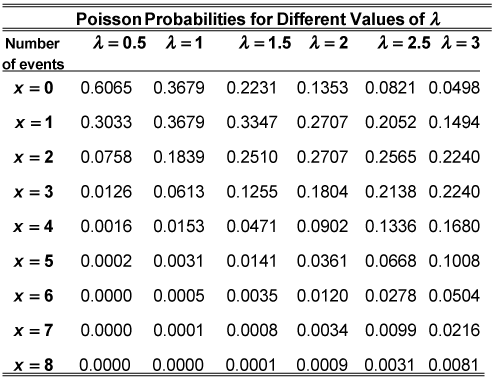 The table shows the Poisson probabilities for different values of

In the cellphone example, because x = 2 and