When you use a small sample to test a hypothesis about a population mean, you take the resulting critical value or values from the Student's t-distribution. For a two-tailed test, the critical value is

The critical value or values are used to locate the areas under the curve of a distribution that are too extreme to be consistent with the null hypothesis. For a two-tailed test, the value of the level of significance

is split in half; the area in the right tail equals

and the area in the left tail equals

As an example of a two-tailed test, suppose the level of significance is 0.05 and the sample size is 10; then you get a positive and a negative critical value:

You can get the value of the positive critical value

directly from the Student's t-distribution table.

You represent them graphically as shown here. 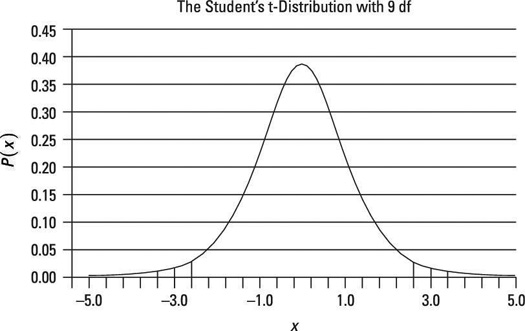 The shaded region in the two tails represents the rejection region; if the test statistic falls in either tail, the null hypothesis will be rejected.