In statistics, a large sample has a size greater than or equal to 30. When you use a large sample to test a hypothesis about a population mean, the resulting two-tailed critical value or values from the standard normal distribution equal

For hypothesis testing applications, the critical values listed in this table are used frequently; you may want to memorize them.

For a two-tailed hypothesis test of the population mean with a level of significance of 0.05, the two critical values are

You can find the positive critical value in a standard normal table, like this one.

In this example, you find the positive critical value

by checking the body of the table for a probability of

In other words, the positive critical value represents the number of standard deviations above the mean at which

Because the standard normal table shows areas to the left of specified values, you can find the positive critical value by locating the probability 0.9750, not 0.0250, in the body of the above table. You find this probability by following the row 1.9 under the Z column to the 0.06 column. Therefore, the critical value

This figure shows these values graphically. 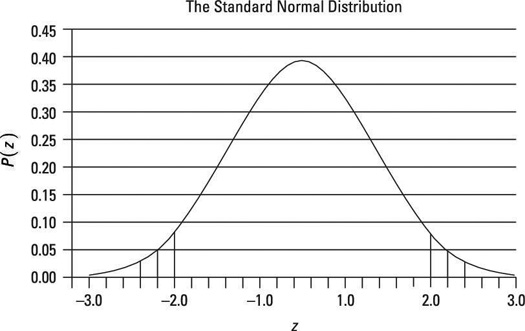