When testing a hypothesis for a small sample where you have to find the appropriate critical right-tail value, this value depends on certain criteria. In addition to being positive, the value also depends on the sample size and whether or not the population standard deviation is known.

After you calculate a test statistic, you compare it to one or two critical values, depending on the alternative hypothesis, to determine whether you should reject the null hypothesis.

You draw these critical values from the Student's t-distribution with n – 1 degrees of freedom (df).

The critical value or values are used to locate the area under the curve of a distribution that is too extreme to be consistent with the null hypothesis. For a right-tailed test, these are the large positive values, which are collectively known as the right tail of the distribution. The area in the tail equals the level of significance of the hypothesis test.

As an example of a right-tailed test, suppose the level of significance is 0.05 and the sample size is 10; then you get a single positive critical value:

Refer to the Student's t-distribution table to find the intersection of the row representing 9 degrees of freedom and the column headed t0.05.

The critical value is 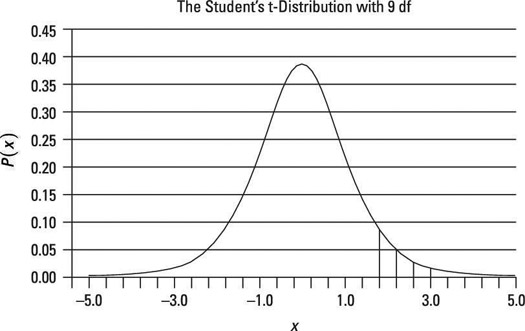 The shaded region in the right tail represents the rejection region; if the test statistic falls in this area, the null hypothesis will be rejected.