If the variances of two independent populations aren't equal (or you don't have any reason to believe that they're equal) and at least one sample is small (less than 30), the appropriate test statistic is

In this case, you get the critical values from the t-distribution with degrees of freedom (df) equal to

Note that this value isn't necessarily equal to a whole number; if the resulting value contains a fractional part, you must round it to the next closest whole number.

For example, assume that Major League Baseball (MLB) is interested in determining whether the mean number of runs scored per game is higher in the American League (AL) than in the National League (NL). The population variances are assumed to be unequal.

MLB tests the null hypothesis that the population mean scores are equal at the 5 percent level of significance.

Here's a summary of the sample data:

Because MLB is interested in determining whether the mean number of runs scored per game is higher in the American League than in the National League, you use a right-tailed test. The alternative hypothesis is 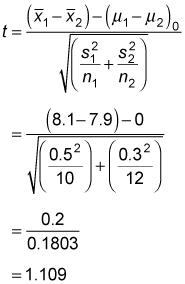 And you find the degrees of freedom like so: 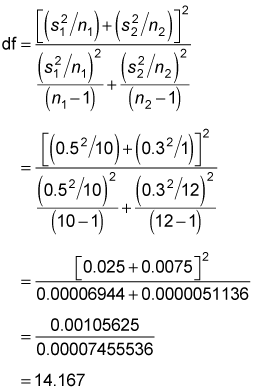 This result is obtained from the following table by finding the column headed t0.05 and the row corresponding to 14 degrees of freedom.

fails to be rejected. There's insufficient evidence to conclude that more runs are scored during American League games than National League games.