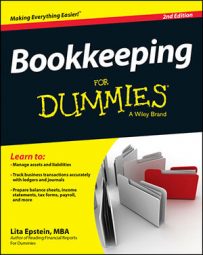 In addition to following wage and salary guidelines set for your business, when calculating payroll, you, the bookkeeper, must also be familiar with how to calculate the employee taxes that must be deducted from each employee’s paycheck. These taxes include Social Security; Medicare; and federal, state, and local withholding taxes.

Employers and employees share the Social Security tax equally: Each must pay 6.2 percent (0.062) toward Social Security up to a cap of $117,000 per year per person (as of this writing). After an employee earns $117,000, no additional Social Security taxes are taken out of his check. The federal government adjusts the cap each year based on salary level changes in the marketplace. Essentially, the cap gradually increases as salaries increase.

The bookkeeper deducts $62 from this employee’s gross pay, and the company pays the employer’s share of $62. Thus, the total amount submitted in Social Security taxes for this employee is $124.

Employees and employers also share Medicare taxes, which are 1.45 percent each. However, unlike Social Security taxes, the federal government places no cap on the amount that must be paid in Medicare taxes. So even if someone makes $1 million per year, 1.45 percent is calculated for each pay period and paid by both the employee and the employer.

Here’s an example of how you calculate the Medicare tax for an employee who makes $1,000 per pay period:

The bookkeeper deducts $14.50 from this employee’s gross pay, and the company pays the employer’s share of $14.50. Thus, the total amount submitted in Medicare taxes for this employee is $29.

Deducting federal withholding taxes is a much more complex task for bookkeepers than deducting Social Security or Medicare taxes. You not only have to worry about an employee’s tax rate, but you also must consider the number of withholding allowances the employee claimed on her W-4 and whether she’s married or single.

Trying to figure out taxes separately for each employee based on his or her tax rate and number of allowances would be an extremely time-consuming task, but luckily, you don’t have to do that. The IRS publishes tax tables in Publication 15, “Employer’s Tax Guide,” that let you just look up an employee’s tax obligation based on the taxable salary and withholdings.

You can access the IRS Employer’s Tax Guide online. You also can find tables for calculating withholding taxes.

The IRS’s tax tables give you detailed numbers up to ten withholding allowances. The following table shows a sample tax table with only seven allowances because of space limitations. But even with seven allowances, you get the idea — just match the employee’s wage range up with the number of allowances he or she claims, and the box where they meet contains the amount of that employee’s tax obligation.

For example, if you’re preparing a paycheck for a married employee whose taxable income is $1,000 per weekly pay period, and he claims three withholding allowances — one for himself, one for his wife, and one for his children — then the amount of federal income taxes you deduct from his pay is $75.

In addition to the federal government, most states have income taxes, and some cities even have local income taxes. You can find all state tax rates and forms online. If your state or city has income taxes, they need to be taken out of each employee’s paycheck.

Lita Epstein, MBA, designs and teaches online courses in investing, finance, and taxes. She is the author of Trading For Dummies and Bookkeeping Workbook For Dummies.