Circumcision is the surgical removal of the foreskin from the penis, and it's done mostly for cultural or religious reasons. Baby boys are always circumcised in Jewish and Muslim cultures, and many Western societies also perform circumcisions.

Part of the impetus for circumcision’s popularity in many Western societies is that the penis is easier to keep clean without the foreskin. Small glands underneath the foreskin secrete an oily, lubricating substance. If these secretions accumulate and mix with dead skin cells, a cottage cheese–like substance called smegma forms. In an uncircumcised man, smegma can build up and lead to infections and, sometimes, even more serious diseases.

Some parents and physicians no longer believe circumcision is necessary. Because of today’s better hygiene, circumcision isn't always considered necessary, although the debate isn’t entirely over.

An uncircumcised man should always take special precautions when bathing to pull back the foreskin and clean carefully around the glans. 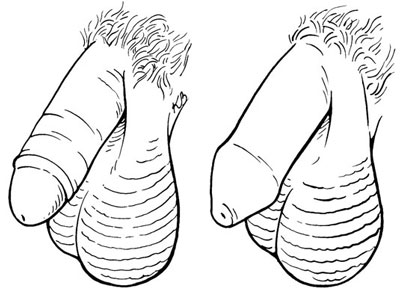 It's common to question the affects of circumcision on sexual performance and other aspects of a man’s life. The penis of a man who hasn’t been circumcised is often more sensitive than that of a circumcised man. The reason for this is that the glans, or head, of a circumcised penis gets toughened by coming into contact with the man’s underwear all day without the protection of the foreskin. As such, people may wonder whether circumcision affects sexual performance.

Also, some men who aren’t circumcised erroneously believe that, because their skin is more sensitive, they are more likely to have premature ejaculation. Adult men may ask if they should be circumcised to cure them of this problem. There is no scientific study suggesting that circumcision makes a significant difference. Most certainly a man who isn’t circumcised can learn how to prolong his climax just as effectively as a man who is.

Some men have also asked if a way exists to replace their foreskin. These men feel that, because the skin of the glans has been toughened, they are missing out on certain pleasures. In truth, as long as they are having orgasms, this isn’t something that they should worry about.

Many studies have been done to see whether a man’s penis being circumcised affects his risk of getting HIV, but no connection was found. Then in 2006, a study in Brazil showed a clear correlation. The theory is that the virus grows in the warm, moist environment under the foreskin of an uncircumcised penis. Although this one test isn’t enough to prove that circumcising at-risk men, particularly in Africa, would reduce the rate of transmission, perhaps further study will do just that.