By: Richard Snyder and Wendy Jo Peterson and
Updated: 03-26-2016
From The Book: Adrenal Fatigue For Dummies

Intestinal dysbiosis is a general term that refers to an unhealthy small intestine due to an imbalance in gastrointestinal bacteria. This can cause adrenal fatigue. You see the loss of the integrity of the intestinal cells; the tight junctions are worn down, and gaps exist between the cells. The cells have lost the glue that keeps them working well. 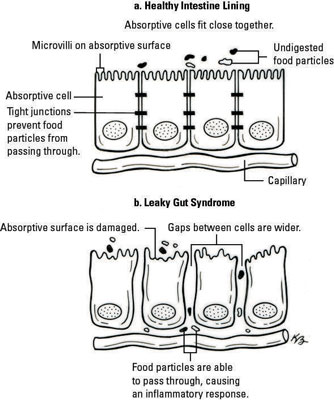 Among the factors that can cause intestinal dysbiosis are antibiotic and other medication use and the overgrowth of a yeast called Candida.

How antibiotics can throw off the intestinal ecosystem

Antibiotics can really disrupt the delicate balance of the intestinal ecosystem, killing off the good bacteria that keep the bad bacteria at bay. Even one dose of an antibiotic can have a significant effect on the ecosystem of the intestine.

Unfortunately, healthcare practitioners prescribe huge amounts of antibiotics. Most people expect that they'll get an antibiotic when they see their doctors, and some parents practically demand that their children receive antibiotics regardless of whether they're warranted. The medical profession is just starting to realize the negative effects of the overuse of antibiotics.

Be aware of some of the clinical consequences of antibiotic use:

Which antibiotics do you need to be aware of? Well, any class of antibiotics has the propensity to alter the intestinal flora, but certain classes — including the penicillins, cephalosporins, fluoroquinolones, and clindamycin — have been recognized as causes of antibiotic associated colitis and Clostridium difficile colitis.

Think of your immune system as a part of you that matures and develops as you do. You can avoid damaging it by minimizing antibiotic use. Of course, we're not saying that a patient shouldn't be prescribed an antibiotic when absolutely needed, but be cautious, especially with children.

The next time an antibiotic is a treatment option, both you and your practitioner need to ask, “Is this antibiotic really necessary? Would a natural remedy work to boost the immune system and help fight off that infection?”

If an antibiotic is truly the best treatment, ask whether you can take probiotics (beneficial microorganisms) with it to help replenish the good bacteria. This helps minimize the degree of damage that the antibiotic does to the intestinal tract.

How Candida fungus can lead to intestinal dysbiosis

Bacteria aren't the only organisms in the intestinal ecosystem. Candida, the most common genus of yeast (a fungus), is also in your small intestine. It's usually present in very small amounts, and the beneficial bacterial flora help keep the level of Candida in check.

The symptoms of Candida overgrowth (and how to reverse them) can include the following:

Dr. Richard Snyder, DO, is board certified in both internal medicine and nephrology, as well as a clinical professor at the Philadelphia College of Osteopathic Medicine.

Wendy Jo Peterson, MS, RD, is a registered dietitian with a master’s degree in nutritional sciences as well as a specialist in sports dietetics. She is the coauthor of Mediterranean Diet Cookbook For Dummies.