By: Richard Snyder and Wendy Jo Peterson and
Updated: 03-10-2022
From The Book: Adrenal Fatigue For Dummies 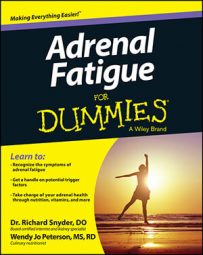 Explore Book Buy On Amazon
Treating adrenal fatigue includes improving nutrition, replacing key nutrients, supplementing with antioxidants, reducing stress, and beginning a controlled exercise program. Before you can treat the condition, though, you need to recognize the symptoms that suggest you have adrenal fatigue.

Recognizing the symptoms of adrenal fatigue

It’s hard to recognize the symptoms of adrenal fatigue for what they are. Many of them develop gradually, and people tend to ignore them until things get really bad. If you have more than one of the following symptoms, you may have adrenal fatigue; see your healthcare practitioner for testing.

One big contributor to the development of adrenal fatigue is the nutrient-poor, processed Western diet. Your adrenal glands need certain vitamins and minerals on a daily basis for optimal health. Consider adding these supplements to your daily regimen, but be sure to consult your healthcare practitioner before you start any of them; you can work together to determine the right dosage.

Diet plays an important role in managing adrenal fatigue. You need to know which foods to add to your diet and which foods to avoid. The foods listed here can acutely stress out an already fatigued adrenal gland. They may provide a short-term energy boost, but cause you to crash later in the day.

You also want to avoid any foods to which you have a sensitivity or allergy. Examples of common food sensitivities include gluten and wheat. Gluten, like other food sensitivities, can be a cause of chronic inflammation and an overactive immune system. It’s a potent stimulus of adrenal fatigue.

Exercise provides many benefits, including stress reduction. If you’ve been diagnosed with adrenal fatigue, you need to begin your exercise program in a controlled fashion. Start with exercises that are low-intensity and of short duration. After you see how you feel, you can increase the amount of time you exercise and then begin to increase the intensity of your workouts. Exercising in this fashion reduces the risk of fatigue and muscle injury.

Here are some exercises to consider as you begin addressing your adrenal fatigue:

Getting support when you have adrenal fatigue

Many people aren’t aware that adrenal fatigue exists or that it’s a medical problem. This lack of information is an issue not only among family and friends but also for many people in the medical community. Be candid with your healthcare provider and your family about this condition:

Dr. Richard Snyder, DO, is board certified in both internal medicine and nephrology, as well as a clinical professor at the Philadelphia College of Osteopathic Medicine.

Wendy Jo Peterson, MS, RD, is a registered dietitian with a master’s degree in nutritional sciences as well as a specialist in sports dietetics. She is the coauthor of Mediterranean Diet Cookbook For Dummies.