By: Marni Wasserman and
Updated: 03-26-2016
From The Book: Plant-Based Diet For Dummies 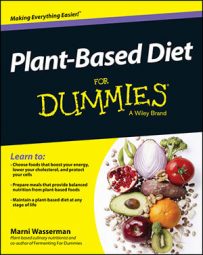 There is no doubt that eating meat creates health concerns not only for consumers but also for the environment and (of course) the farmed animals, and it’s unfortunate that people overlook so many of these problems. Animals are taken advantage of, the environment suffers, and ultimately you suffer, as well.

Meat isn’t as rich in nutrients as plants

An animal-based diet isn’t as diverse in terms of nutrients as a plant-based diet is. You pretty much get two main macronutrients — protein and fat — with essentially no vitamins or minerals, and no fiber. What most people don’t know is that the body needs vitamins and minerals to digest and assimilate protein efficiently. Bodies also need fiber to help push things through and assimilate nutrients.

Meat intake can build up in the body and slow things down, causing you to feel tired and undernourished. Going plant-based ensures that your body at least gets the nutritional baseline it requires to thrive on a day-to-day basis.

Most conventionally raised animals are fed bottom-of-the-barrel feed that isn’t in any way natural to them. This not only leaves animals unsatisfied on many levels but also affects their biological makeup. Many are starved of the nutrients they require to be healthy because they’re fed an unnatural diet. This affects not only their well-being but ultimately the well-being of meat consumers. The foods these animals eat aren’t part of their native diet.

Meat is one of the major acidic foods in the standard North American diet. It’s difficult for the body to break down and digest and requires extra work from the kidneys. As a result, it produces too much acid in the body. Too much acid not only weakens the body’s immune defenses, which increases risks for infections, but also contributes to chronic diseases.

The other consideration to look at is the quality of meat that a majority of people eat: often it’s fried, overcooked, and not eaten alongside green vegetables. This not only creates acidity in the body but also does nothing to help neutralize it. Choosing to eat more plants throughout the day can help balance this ratio.

Meat is loaded with toxins

Animals are sponges that soak up toxicity. Because a majority of their biological makeup is fat, their bodies can accumulate an excessive amount of toxins. So, when the animals eat a toxic diet, these toxins get carried with them for life, and they end up in the food you eat.

The sea life that swims in polluted oceans and waterways has incredibly absorbent skin and fat, which is why fish and other seafood are often tainted with mercury and other heavy metals.

Meat is high in saturated fat

It’s one of the things we hear a lot these days: “Be mindful of the amount of saturated fat you eat!” Unfortunately, many people get confused about the sources of this unhealthy fat and don’t realize that a majority of it is from animals. Saturated fat is healthy for the living animal, but the human body can’t break it down in a way that is healthy.

Eating the amount of saturated fat from animals that most people do can lead to major health problems. Additionally, many people are eating fried meats, fatty cuts, and skin, with no care for leaner options — all of which contribute to plaque buildup, heart disease, and other diseases, such as obesity and diabetes.

Eating meat can increase your risk for cancer and osteoporosis

In addition to causing heart disease, excess meat consumption leads to other health-degrading conditions, such as osteoporosis and even cancer. The excess protein — despite what people may think — isn’t good for the body. Also, the accumulation of meat can lead to more fatty deposits in the body, which become plaque deposits, and they can start to calcify and affect many of our tissues and bones, causing long-term diseases like heart disease.

The impact that meat consumption continues to have on climate change is quite intense. Although most people wouldn’t associate the two, here’s a bit of the picture: To keep up with the demand for meat, cows are fed an incredible amount of food, which produces waste. This waste gives off methane gases, which contribute to ozone depletion by trapping heat in the atmosphere.

Manufacturing one calorie from animal protein requires 11 times as much fossil fuel input as producing a calorie from plant protein. Why is this bad? Burning fossil fuels (such as oil and gasoline) releases carbon dioxide, the primary gas responsible for climate change.

As a result of the increase in demand for meat, factory farms (large, industrialized farms on which large numbers of livestock are raised indoors in conditions intended to maximize production at minimal cost) are on the rise.

Very little care is taken for the animals’ welfare. They’re given antibiotics to combat the infections they get from living in such close quarters and growth hormones to increase their size and weight in an unnaturally short period of time (and both of these things eventually wind up in your food).

The meat industry is getting worse

The more control mankind has had over food, the worse it has gotten. This is apparent with packaged foods but especially with animal-based foods. Obviously, an increased demand for meat has strained the supply chain. To put enough meat on the shelves at inexpensive prices, farmers have put into place often-unsustainable practices.

This can mean manipulating the environments in which animals are raised, which can lead to contamination of the animal feed, the soil, the land, and ultimately the meat on your plate. It’s no wonder that every couple of years you hear about some bacteria, such as salmonella or E. coli, that has found its way into the food supply.

Marni Wasserman is a culinary nutritionist and health strategist. She owns and operates her Food Studio and Lifestyle Shop in Toronto where she teaches people how to make everyday eating simple and delicious. She also writes for Tonic Toronto magazine, Huffington Post, Chatelaine Magazine, and her blog at www.marniwasserman.com.