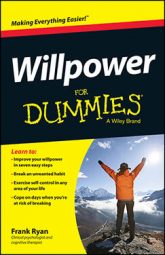 Willpower does not exist or, indeed, flourish in a vacuum. Your willpower will work best for you when you’re in a positive frame of mind, able to fully benefit from the support of friends and family, and able to recognise the unconscious thinking traps or biases that can undermine your willpower. The resources outlined here can help you in achieving this, and will steer you towards creating a personal, social and mental context that will help cultivate your willpower.

Finding out more about happiness and wellbeing

Visit this series of short videos on the themes of happiness, well-being and the role of pleasure and reward in self-regulation, presentations that enable you to discover more about the science of willpower.

For example, Barry Schwartz’s talk entitled The Paradox of Choice explains how the explosion of variety in everything from foodstuffs to clothing (You're bound to laugh at his bewilderment at the choices he had to make when replacing his well-worn jeans!) can lead to dissatisfaction with the choices you make. His view is that when you choose something from the wide list of possibilities there is a risk that you can become miserable thinking about what you did not choose – a bit like somebody who has a good catch while fishing but keeps thinking of the ‘one that got away’! Moreover, having to make multiple decisions risks depleting willpower, which is a limited resource.

The mental effort you exert in resolving each dilemma reduces the amount of willpower you have available for later decisions. This means that the more choices you have to make in any given transaction, the greater is the likelihood of faulty decision making. Thus, having made numerous careful decisions about specifications for a new car, there is an increased likelihood that your later decisions – perhaps opting for the satellite navigation and entertainment system that can add 15 per cent to the purchase price – will subsequently come to be regretted. Put simply, impulsivity increases while willpower decreases.

John's Cacioppo's The Lethality of Loneliness emphasises the value of building and maintaining social networks as ‘scaffolding’ for willpower. A converse lack of social networks, up to and including social isolation or loneliness, is demonstrably bad for mental and physical wellbeing.

Professor Cacioppo, in his video essay, presents stark evidence of the negative impact of loneliness. He describes population studies indicating that loneliness is bad for your health and can even shorten your life. This message isn’t meant to be alarmist: these are largely long-term effects which come with the obvious solution involving recognition of the problem and taking steps to resolve it.

Professor Cacioppo talks about how, when people are normally isolated, they become more defensive and their attention narrows. These changes can constrain willpower and contribute to a vicious circle where isolation prevents access to alternative rewards that could incentivise willpower and the social support essential to maintain willed change. There are some surprisingly simple solutions, such as going to the same shop or café, perhaps at the same time each day, in order to increase the likelihood of repeated social interaction.

This resource on cognitive biases provides a comprehensive list of thinking biases or distortions. These thinking biases or distortions are important to recognise because they can distort your decision making and propel you down the wrong path. This can waste your willpower in the same way that driving down the wrong road can burn up precious fuel.

The gamblers fallacy, for instance, leads gamblers to believe that future probabilities are influenced by past events. Thus, if a tossed coin falls heads up three times this bias misleads by inferring it is more likely to be tails up on the fourth attempt. It isn’t! It’s always 50:50. When betting is involved, this could lead to futile chasing of losses as in ‘the first three horses I bet on lost, so the fourth is much more likely to win’ or ‘I’ve shoved a lot of coins into the betting machine, it’s bound to cough up with the next one’.

Such dogged devotion to trying harder in the face of failure can lead to willpower depletion in any domain, not just with gambling. For example, if you applied for promotion at work three or four times only to be met with polite refusal on each occasion and thought ‘I’ll be successful next time’ you might be better advised to re-evaluate your training, qualifications or aptitudes. Don’t interpret this as a ‘quitters Charter’. Far from it!

Recognising that willpower is a limited resource and that it is best used to pursue one major goal at a time creates a different perspective: You might decide to invest your willpower in doing further training or broadening your search to other prospective employers. Being aware of the probably false premise that the near achievement of your goal on several occasions is predictive of imminent success can help you to make a more informed decision about how best to deploy your willpower.

Another thinking bias is known as the endowment effect, where someone overvalues effort, money or, indeed, any resource already expended to the extent that ‘good money is thrown after bad’. For example, an entrepreneur who invests £50,000 in a business only to see it fail to generate any significant revenue or profit would be best advised to cut his or her losses. But the cash already invested has been ‘endowed’ with value and investors are often very reluctant to cut their losses and seek to invest more funds rather than accept the fact that the business has failed.

Willpower, like money, is a limited resource. When willpower proves insufficient because the goal proves unattainable it is best to write off willpower already ‘spent’ and find a more attainable goal.

The pessimism bias, the tendency to recall more negative information or to predict more negative outcomes can undermine willpower in two ways. First, negative moods triggered by pessimistic memories and forecasting reduces the ‘bandwidth’ or working memory capacity essential for willpower. Second, negative predictions might simply lead to the ‘I can’t be bothered’ feeling when, in fact, the chances of success were favourable.

Overall, these biases operate in the background, often unconsciously, and can lead to willpower exhaustion in the pursuit of a futile goal or in an ultimately hopeless bid to mitigate the perceived loss of the willpower already invested.

Frank Ryan is a clinical psychologist and cognitive therapist, specialising in cognition and impulse control. He is also the author of Cognitive Therapy For Addiction, published by Wiley.