Explore Book Buy On Amazon
So, what determines your resilience? At some point, most people incur some form of suffering, whether it’s the death of a loved one, illness, injury, divorce, job loss, or another difficult life event.

Not everyone copes with adversity in the same way, though, because it’s influenced by multiple factors. Some of these factors you have no control over, like your genes, the culture you grew up in, or critical life events that may have occurred in your past. Some of these factors are within your control, such as your beliefs, behaviors, attitudes, and chosen networks of support.

The question is, which of these determinants carries the most weight when it comes to resilience? Is it up to nature, or is it a result of nurture? 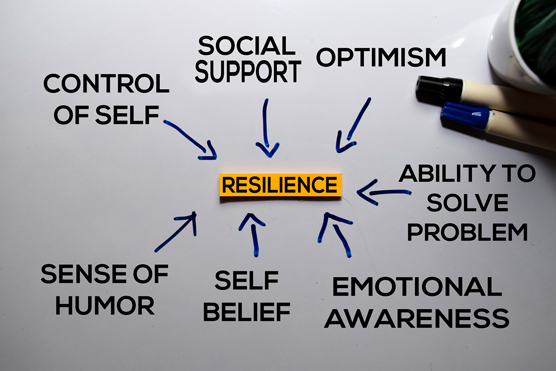 Though genetics does play a role, it appears that people have the ability to develop resilience despite genetics. According to a study conducted by the National Institutes of Health’s National Institute of Nursing Research led by Heather Rusch, two critically important factors associated with resilience are in your control to change:

The stronger these two factors, according to the research, the higher the likelihood that an individual will be resilient in the face of trauma or stress.

Though it hasn’t been established that a single gene or gene variation confers resilience, it has been found that genetic factors can influence how you respond to stress and deal with adversity. A range of genes have been identified that are associated with resilient phenotypes (how a gene expresses itself physically). Genes or variations of genes, for example, can influence the stress response, nervous system, immune system, and pathways that produce feel-good neurotransmitters like serotonin and dopamine and determine your biological response to stress. The bottom line is that science is showing that although genes play a role in determining resilience, they’re only part of the story because it’s now widely known that nature and nurture go hand in hand.

Your life experiences—especially early life, culture, and behaviors—influence the expression of genes and the neurobiological systems that enable adaptation to stress and resilience. Meditation, exercise, healthy nutrition, and social support are examples of lifestyle changes that can effect such neurobiological changes and, possibly, genetic expression. In short, you can influence your genes and still achieve better self-mastery and social support.

Early childhood experiences can positively or negatively affect the development of the stress response and how individuals subsequently learn to cope with adversity. Trauma and abuse can lead to changes in central nervous system circuits, a hyperactive stress response, more anxious behavior, and vulnerability to stress from learned helplessness, as people learn to believe that they have no control to change their circumstance or situation.

It has also been shown that when individuals realize that it’s possible to change behaviors—even in the face of adversity — and feel better, learned helplessness doesn’t happen. Examples might include when a child suffers bullying at school and receives a lot of love and support from family, friends, and counselors and is provided with effective coping tools. Children who gain the ability to adapt to stress develop better self-esteem, prosocial behavior, and more immunity to stress as they age.

As such, neither your genetics nor your past necessarily blocks you from being resilient. Either of these may support a tendency to adapt to stress more effectively or less effectively, but neither seals the deal on your ability to become stronger and more positive and have a better sense of self-mastery.

Individual behavior and coping styles are influenced by cultural patterns of beliefs, values, commitments, resources, and expected behaviors. Culture, therefore, can predict resilience as it shapes how people might see themselves and how they relate to others. The culture of a family can especially shape how a child develops a sense of self-concept and self-esteem. For example, a culture might value the woman’s role as being quiet and docile, and as subject to a man’s authority, whereas another culture advocates for gender equality. Children growing up in either of these households will likely grow up to have very different self-concepts.

Culture refers not just to your ethnicity or religion but also to the culture of your family or your workplace. Cultures that promote respect, collaboration, reliance, open communication, and strong core values promote resilience within the community as well as individual resilience.

Your upbringing and environment can influence your outlook and how you see yourself and the world at large. A positive outlook has been found to be protective in the face of adversity and associated with better coping behaviors, quicker recovery times, improved health and wellbeing, and a better sense of self-mastery. The reverse is true for a negative outlook, as a negative view of oneself and the world increases the perception and magnitude of stress and reduces the sense of self-mastery and belief that challenges are manageable. A negative outlook is associated with limiting beliefs, negative self-talk, narrow thinking, and less effective coping habits.

A myriad of traits are associated with a positive outlook. Those most associated with resilience are believing that success is possible (optimism), viewing difficulties as opportunities for growth and learning, having the willingness to push forward, being able to accept change, and being open to making mistakes and learning from failures. All these traits can be cultivated with practice and also aren’t purely dependent on upbringing and genetics.

Coping habits are habits you have developed that have helped you get through challenges or difficulty. In general, there are two types of coping habits, adaptive and maladaptive. Confronting your fears head-on, appraising situations realistically, calming your emotions, and maintaining healthy behaviors — like good sleep hygiene and a balanced exercise-and-nutrition regimen — are examples of adaptive coping habits. Choosing to avoid dealing with fear and drinking alcohol, binge eating, or throwing yourself into work so that you aren’t sleeping, exercising, or eating appropriately are examples of maladaptive coping habits.

Some adaptive coping habits that improve resilience are exercising, eating a healthy diet, meditating, accessing social support, connecting to spirituality, learning to reappraise thoughts and beliefs, regulating emotions, and partaking in altruistic activities. These habits can be learned and cultivated, even when maladaptive coping has been the norm.

Support comes in the form of family, intimate partners, colleagues, neighbors, friends, spiritual community members, and others. The presence of strong networks of support and the seeking of social support are both associated with resilience. Both invigorate psychological hardiness and the ability to thrive in the face of adversity. Studies show that stronger social bonds can improve quality of life, wound healing, and life expectancy. In contrast, the lack of support is correlated with more depression and a weaker sense of control.

The ability to forge healthy social bonds, be able to communicate effectively, and show value and compassion are traits that a resilient person exemplifies, enabling them to have a truly viable social support system in times of need. With help, anyone can learn to improve their ability to form healthier relationships and stronger networks of support.

Sometimes, you have to laugh to literally keep yourself from crying, and when you do, it can make you more resilient. Humor helps you release stress, and it’s a conduit to strengthening social bonds while being protective against stress. A study of sojourn students from mainland China attending school at a Hong Kong university, for instance, found that the students who used humor to adjust to the new culture were able to thrive best, and that humor acted as a buffer against stress.

Humor and laughter are wonderful resources when coping with hardship, because they lighten the load emotionally as well as physiologically. Laughter especially can relax the stress response, give you more energy, and soothe tension. It has also been found that laughter can improve your immune system, relieve pain, improve your mood, and enhance a sense of wellbeing. You always have the option to make use of your funny bone during times of stress.

The internal belief system that guides values, ethics, social behaviors, and psychological outlook also influences resilience. Individuals who have a strong sense of purpose, a feeling of connection to a greater whole, or a feeling of connection to spirituality are more resilient. Studies show that purpose in life is a key factor in helping individuals manage traumatic events, and that low spirituality is a leading predictor of low resilience. Whether it’s because you have a sense of purpose, belong to a spiritual community, partake in healthier behaviors, or have a more optimistic outlook, science confirms that spirituality confers better health.

It doesn’t matter what pathways you choose to connect to spirituality, because it comes in many forms. You can follow a particular faith or religion, feel connected to a higher power, spend time in nature, read uplifting literature, or be driven by a higher purpose. How spiritual you are today may be influenced by your upbringing and culture, but it’s also a factor that can be cultivated in order to build your resilience.

Eva Selhub, MD is a physician and resilience expert. She taught for 20 years as an instructor of Medicine at Harvard Medical School, and served as the medical director of the Benson Henry Institute for Mind Body Medicine at the Massachusetts General Hospital for six years.