The Importance of Control and Demand on Job Stress

By: Allen Elkin and
Updated: 03-26-2016
From The Book: Stress Management For Dummies

A worker in a high-stress job typically faces tough demands but has little control over how the work gets done. Workers in these jobs report significantly more fatigue and exhaustion, trouble getting up in the morning, depression, nervousness, anxiety, and insomnia or disturbed sleep than workers in lower-stress jobs.

Jobs with low decision latitude tend to be relatively unskilled. Employees under these conditions don't have the authority to make decisions about their work or work environment (including input about job location, flexibility of work time, the ability to telecommute, and so on). They have little opportunity to learn new skills and problem-solve on the job.

Jobs with high psychological demand typically have heavy workloads (too much to do) and not enough time to do the work, as well as the pressures, conflicts, and responsibilities of the job. Picture that "I Love Lucy" episode where Lucy and Ethel work at a conveyer belt trying (unsuccessfully) to pack chocolates into their boxes, even as the chocolates come down the belt at increasingly rapid rates.

Not surprisingly, when workers who face high demands are given more control and/or reduced workloads, their stress is lower.

For years now, Dr. Robert Karasek and his colleagues at UMass, Lowell, have been researching job stress from a scientific perspective, attempting to determine what causes it. They've found two major variables that strongly correlate with a job being stressful:

This simple model illustrates the relationship between job demands, job control, and stress, as suggested by Karasek's findings: 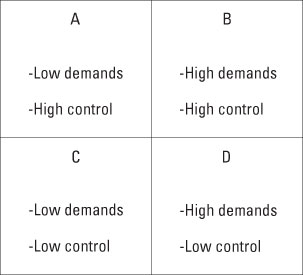 Allen Elkin, PhD, is a clinical psychologist and the director of The Stress Management & Counseling Center in New York City. Nationally known for his expertise in the field of stress and emotional disorders, he has appeared frequently on Today, Good Morning America, and Good Day New York.