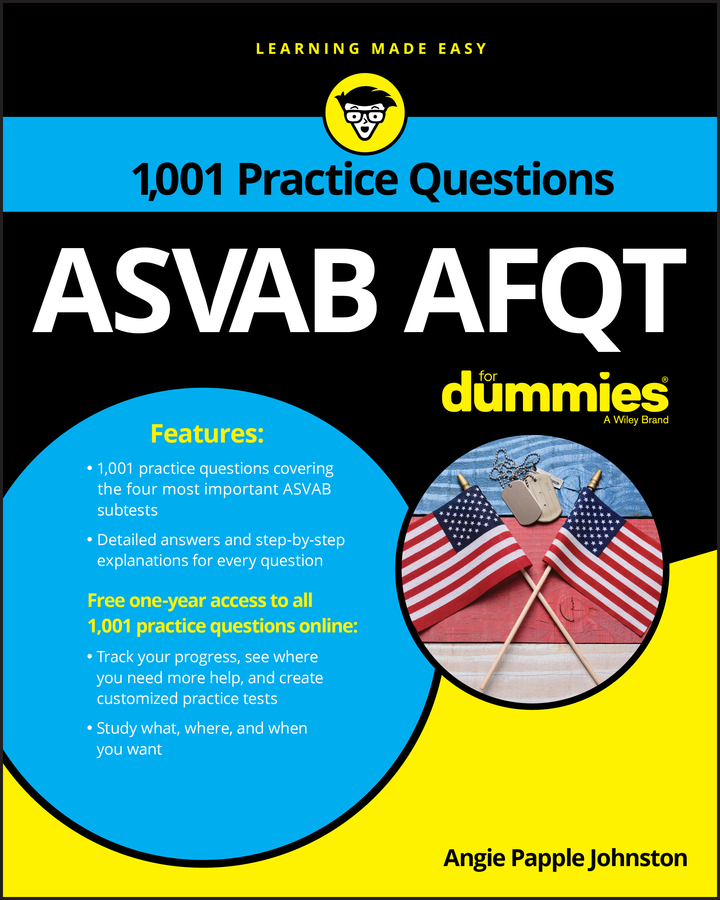 The Electronics Information subtest of the ASVAB is aimed at discovering your level of understanding when it comes to electricity. You will need to have some understanding of power, circuits and electrical effect.

Power is measured in watts. One watt is a very small amount of power. It would require nearly 750 watts to equal 1 horsepower. One kilowatt represents 1,000 watts.

A kilowatt-hour (kWh) — the amount of electricity a power plant generates or a customer uses — is equal to the energy of 1,000 watts working for one hour. Kilowatt-hours are determined by multiplying the number of kilowatts (kW) required by the number of hours of use. For example, if you use a 40-watt light bulb 5 hours a day, you’ve used 200 watt-hours, or 0.2 kilowatt-hours of electrical energy.

The term watt was named to honor James Watt, the inventor of the steam engine.

Getting around to circuits

Although this section suggests that electricity flows like water, it actually flows more like NASCAR. Electricity must be sent along the path of a closed circle (a circuit), just like all those NASCAR speedsters roaring around the track. The drivers never actually get anywhere; they just keep driving in circles. Electrical charges are a lot like that.

However, electricity does flow like a river in one respect. In general, electricity follows the path of least resistance. The conventional way in thinking about the electrical flow of current is based on the vacancies left by electrical particles “moving” from the positive (+) terminal to the negative (–) terminal of a battery. This concept is called conventional current.

However, the military teaches current flow based on the flow of the electrons, and electrons, no matter how you look at them, flow from the negative terminal to the positive terminal. 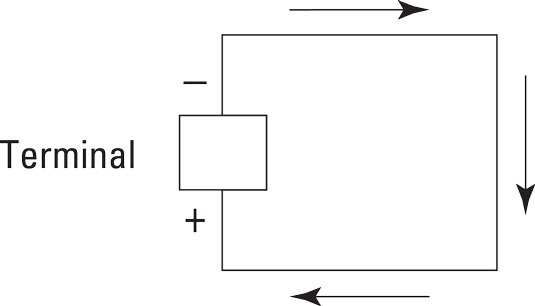 If any of the wires leading from one terminal to the other is broken, the circuit is shot — no more current. Current can’t flow because under most circumstances, the electrons can’t bridge the open gap in a conductor (the open gap is basically air, and air is an insulator).

In some cases, current does flow through an insulator — if there’s enough difference of potential (voltage). When lightning bridges an expanse of air from a cloud to ground (or a tree or a golfer), it’s because there is a huge amount of voltage, on the order of 100 million volts, between the source of the lightning and (literally) ground.

Here’s another circuit problem that may come up: A short circuit occurs when any wire accidentally crosses over another wire, causing the electricity to bypass the rest of the circuit and not follow the intended path.

Electric currents can produce different effects. These effects are packaged and sold commercially. The following is a description of effects produced by current and some of their commercial applications: