Mastering the Science of Movement Training for the ACFT

Explore Book Buy On Amazon
If you walked into a gym right now, you’d most likely see rows of machines dedicated to training just one muscle at a time. Those are great for bodybuilders but not necessarily for the average soldier. Because most military occupational specialties (MOSs) have at least minimal physical demands, and because those demands require real-world movement, many of the machines at the gym are great supplements to your training. However, you definitely need movement training, too.

Improving athleticism, which is what the Army is really testing with the ACFT, requires a combination of muscular and movement-based training. Movement training is unlike muscle training. It harnesses your natural human kinetics—the way you move—and makes your movements stronger, more stable, and safer.

In standard muscle training, you have to isolate a muscle (or a group of muscles) to focus all your work there. Your intent is to put force in just one region of your body, like your chest, while the rest of your body is stabilized and still, and your goal is to see just how much force you can send into that region and still execute a movement, such as a chest press. You don’t want to “cheat” by using momentum because that means other muscles are pitching in to help you execute the movement. That’s fine if that’s the type of training you’re doing.

And with the ACFT, the Army is testing your ability to pull off complex movements—not just your ability to use your pecs and a few smaller muscles to push yourself off the ground. That means you have to cross-train, use three-dimensional movements and your planar movements, and use weight training to complement everything you’re doing if you want to perform well on the ACFT.

These 3D movements come with a wide range of other benefits, too, such as improved

The more momentum you can harness while controlling your form, the more efficiently you work. Your brain automatically wants to execute all your body’s movements in ways that are easiest to accomplish—but not necessarily in ways that prevent injury (think about the last time you did bicep curls and threw your back into them, or picked up a box from the floor without bending your legs).

With physical training, you can do your work in one or more of the three planes of motion: the sagittal plane, the frontal plane, and the transverse plane.

If you’re working in the sagittal plane, you’re moving two-dimensionally—up and down or back and forth. In the frontal plane, you’re making side-to-side movements. Finally, in the transverse plane, you’re using twisting or rotating movements. Work in any of these planes can be unloaded, which means you have only your body weight, or loaded, which means you’re using an external mass while moving. An external mass can be anything from a barbell loaded with weight to your Improved Outer Tactical Vest, or IOTV.

Most exercises in the three planes of motion fall into one or more of four main categories:

Strictly training in loaded linear movements can easily result in overuse injuries. Working in 3D allows other muscles, connective tissues, and joints to pitch in to complete a task, which “shares the load.”

The 4Q model allows you to group exercises together by type: unloaded linear, unloaded 3D, loaded linear, and loaded 3D. (Check out the preceding section for more on these types of movements.) The figure shows the 4Q model, as well as some of the exercises that belong in each quadrant. 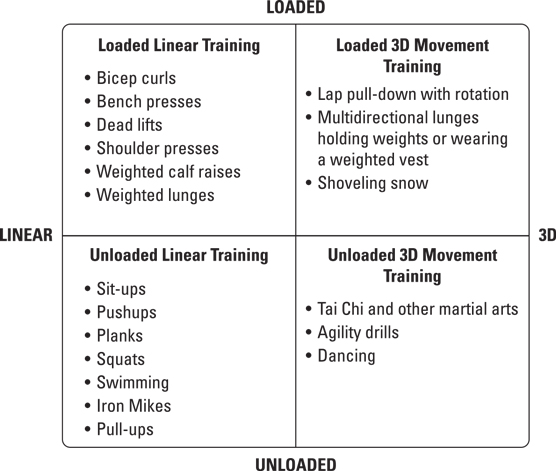 Training in all four quadrants is essential for optimal results. If your goal is overall strength and endurance, you can’t leave one (or more) out.

Loaded training requires you to add external mass to movement. Any mass counts, whether it’s a 1-kilogram plate alone or a bar loaded with 400 pounds. How much mass you need to move to make gains and improve your fitness level depends on your current level of physical fitness. Your body will adapt to larger loads over time, provided that you use something that challenges you and forces a change in your muscles. When your body adapts to a certain amount of weight, it’s no longer going to force your muscles to adapt, so if you want to become stronger, you have to increase the mass of the loads you’re working with.

Loaded multi-planar training is relatively new—at least in the gym. Classic strength training isolates muscles with the purpose of strengthening only those muscles, as evidenced by people hitting the gym for “chest day” or “cardio day.” (Everyone knows what happens when “leg day” isn’t part of a weekly routine.)

But loaded multi-planar movement falls into the upper-right quadrant in the 4Q model, and training there is absolutely essential for passing the ACFT. The bottom line is that functioning in and out of the Army requires the human body to move mass while in motion, and most of the time, you have to move that mass in a way that asymmetrically loads your body or puts it in a weird position. If you’re only training to carry something by using both biceps evenly at the same time, without any help from your back or legs, you’re not going to perform as efficiently or as safely as you would if you practiced loaded movement training that integrated your whole body.

ACFT events in the 4Q model