In quantum physics, when you are working in one dimension, the general particle harmonic oscillator looks like the figure shown here, where the particle is under the influence of a restoring force — in this example, illustrated as a spring.

This is also sometimes written as 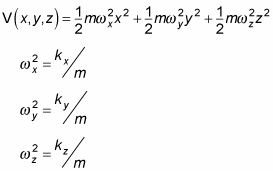 Now that you have a form for the potential, you can start talking in terms of Schrödinger's equation:

Substituting in for the three-dimension potential, V(x, y, z), gives you this equation:

Take this dimension by dimension. Because you can separate the potential into three dimensions, you can write

Therefore, the Schrödinger equation looks like this for x:

Solving that equation, you get this next solution:

Therefore, you can write the wave function like this:

That's a relatively easy form for a wave function, and it's all made possible by the fact that you can separate the potential into three dimensions.

And by analogy, the energy of a three-dimensional harmonic oscillator is given by

Note that if you have an isotropic harmonic oscillator, where

In general, the degeneracy of a 3D isotropic harmonic oscillator is