How to Find Angular Momentum Eigenvalues

Here’s how to derive eigenstate equations with

and using the fact that the eigenstates are normalized, gives you this:

So there’s a maximum possible value of

which you can call

You can be clever now, because there has to be a state

such that you can’t raise

any more. Thus, if you apply the raising operator, you get zero:

Applying the lowering operator to this also gives you zero:

that means the following is true:

At this point, it’s usual to rename

You can say even more. In addition to a

there must also be a

such that when you apply the lowering operator, L–, you get zero, because you can’t go any lower than

And you can apply L+ on this as well:

which gives you the following:

And comparing this equation to

Note that because you reach

by n successive applications of

you get the following:

Coupling these two equations gives you

can be either an integer or half an integer (depending on whether n is even or odd).

and n is a positive number, you can find that

So now you have it:

You can see a representative L and Lz in the figure. 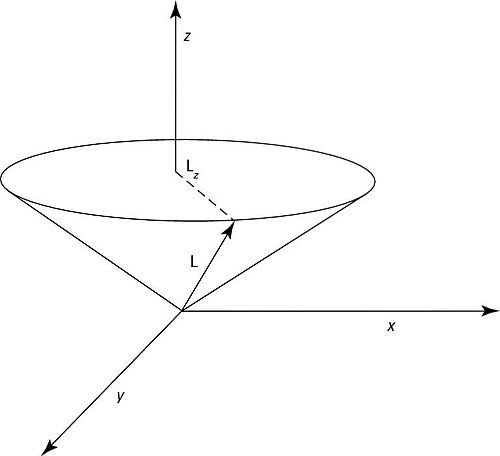