How to Apply the Hamiltonian to a Neutral, Multi-Electron Atom 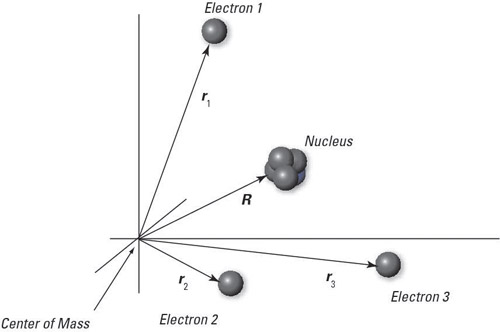 If you have Z electrons, the wave function looks like

And the kinetic energy of the electrons and the nucleus looks like this:

And the potential energy of the system looks like this:

So adding the two preceding equations, here’s what you get for the total energy (E = KE + PE) of a multi-particle atom:

Okay, now that looks like a proper mess. Want to win the Nobel prize in physics? Just come up with the general solution to the preceding equation. As is always the case when you have a multi-particle system in which the particles interact with each other, you can’t split this equation into a system of N independent equations.

However, that doesn’t mean all is lost by any means. You can still say plenty about equations like this one if you’re clever — and it all starts with an examination of the symmetry of the situation.