where f(r) is some as-yet-undetermined function of r. Your next task is to determine f(r), which you do by substituting this equation into the radial Schrödinger equation, giving you the following:

Performing the substitution gives you the following differential equation:

Substituting the preceding equation into the one before it gives you

Because each term in this series has to be zero, you have

Dividing by rk–2 gives you

This equation gives the recurrence relation of the infinite series,

That is, if you have one coefficient, you can get the next one using this equation. What does that buy you? Well, take a look at the ratio of ak/ak–1:

Here’s what this ratio approaches as k goes to infinity:

This resembles the expansion for ex, which is

As for e2x, the ratio of successive terms is

And in the limit

the ratio of successive expansion coefficients of e2x approaches 2/k:

Plugging the form you have for f(r), 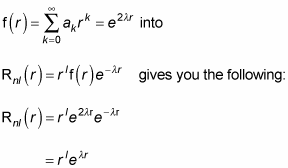 Okay, should you be overjoyed? Well, no. Here’s what the wave function