In physics, free-body diagrams help you understand how Newton's laws of motion describe how objects move when forces are applied to them. Here are some practice questions that you can try.

Use the following force diagram of a mass hanging from a pulley by a massless rope to answer Questions 1 to 3. Letters on the diagram signify vectors. 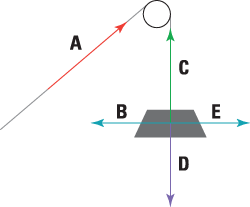 The following are the answers to the practice questions: