The Geologic Events of the Paleozoic Era

Explore Book Buy On Amazon
It’s easy to get distracted by the abundance and diversity of life that appears and flourishes during the Paleozoic. But life and evolution are influenced by the geologic processes that are always shaping the earth’s environments. The Paleozoic saw periods of intense mountain building, extensive glaciations, widespread shallow seas, and the continued buildup of material onto the continental cratons, building the continents into shapes resembling what you see today.

The construction of continents

The history of each continent is told in its rocks. Beginning with the ancient cratons that formed during the Precambrian, geologists interpret the geologic history of the continents from the rock sequences and the stories they tell.

Reading the rocks: Transgressions and regressions

Extensive sedimentary rocks formed in the Paleozoic era indicate times when vast, shallow seas covered the continents, depositing sandstone, shale, and limestone. These rocks are informative because sedimentary rocks record important information about the environments in which they are deposited — particularly when the sedimentary rocks are formed by the settling of particles through water. In such cases, the sediment particles are subject to the laws of physics and gravity that still apply today. For example, a larger, heavier particle will settle out of water more quickly than a smaller, lighter particle.

The result is that the sedimentary rocks formed in the ocean have a distinct pattern to their particle sizes, with sandstone created closer to shore in shallow water and limestone created farther away in deeper water, as illustrated.

The pattern of sedimentary rock formation in the ocean.

By understanding how the depth of the water and distance from shore affects the type of rock formed, geologists can look at the rocks and read a story of changing sea levels.

When sea levels rise and cover more of the continent, the geologic event is called a marine transgression. The sedimentary rocks being deposited in one spot change from sandstone to shale to limestone as the water gets deeper at that location. This situation is illustrated here. 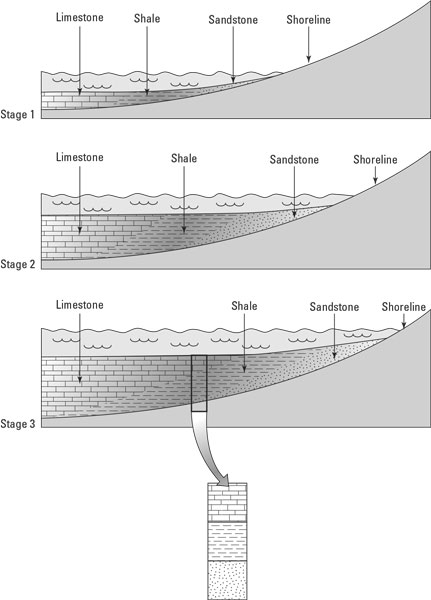 When sea levels drop and expose more of the continent, the geologic event is called a marine regression. As it occurs, the type of rocks forming in one location shift from limestone to shale to sandstone as the water becomes shallower. The rock types in a marine regression are illustrated in this figure. 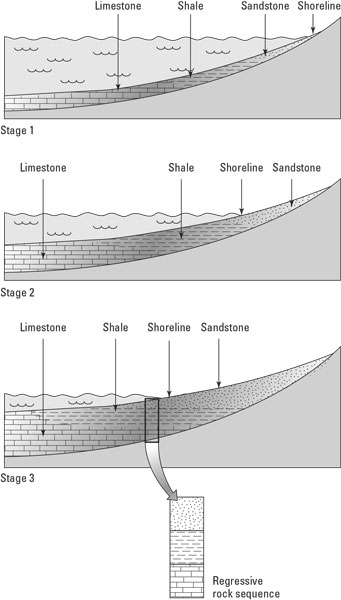 In some regions, these seas became so shallow that they dried up, leaving rocks called evaporites. Evaporites are minerals that form as water evaporates. In other regions, extensive reefs were built by reef-building invertebrates that later became geologic deposits of limestone.

Concern about modern climate change has people talking about reducing the use of fossil or carbon fuels. Both terms refer to coal, oil, and natural gas resources, many of which are found in Carboniferous rock layers created during the late Paleozoic. The abundant plant life in the Carboniferous period left its carbon remains to form geologic deposits in rock layers of coal. In fact, geologists describe these mid- to late- Paleozoic environments as coal swamps. (Some coal swamp deposits were formed during the following period, the Mesozoic.)

A rock sequence common in the Carboniferous period, especially the Pennsylvanian period, is called a cyclothem. Cyclothem rock layers indicate a transition between marine and nonmarine environments, similar to what is observed today at a low-lying river delta such as the Mississippi River. These regions are now (and were in the Carboniferous period) full of thick, swampy vegetation. As these plant materials die, become buried by sediments, and accumulate over time, they turn into coal beds.

The cyclothems of the Carboniferous are so widespread that geologists are still seeking answers to how they were formed because it seems unreasonable that so much of the earth was covered in swampy, transitional marine environments.

Pangaea, the most super of supercontinents

By the end of the Paleozoic, all the major continents on Earth came together, forming a single supercontinent. Pangaea is the most super of supercontinents because there is no evidence that ever before — or ever since — all the major landmasses formed a single continent. The remains of Gondwana, the southern landmass of Pangaea, led early geologists to ask the questions that eventually led to the theory of plate tectonics.

On the supercontinent of Pangaea in the early Mesozoic is when dinosaurs began to evolve.