Geology: Animals with Backbones in the Paleozoic Era

Explore Book Buy On Amazon
Although the early Paleozoic was ruled by invertebrates, the development of skeletal features had also begun. The evolutionary story of chordates—animals with a nerve chord (which later includes animals with a backbone, or vertebrates)—is missing in the geologic fossil record because there were no hard skeletal parts to preserve.

When vertebrate fossils do show up in the fossil record, they are already full-fledged fish with backbones. And due to the presence of an internal skeleton (endoskeleton) and other hard parts (such as teeth and bony scales), the evolution of the fishes is a well-detailed story.

The first fish were not much like the fish you see today. They had spinal cords but no jaws and were called ostracoderms (which means “shell skin”) due to the bony plates covering them. Ostracoderms are members of the group called agnathans and are distant relatives of the lamprey and hagfish: two modern fish that do not have jaws or bony skin. Ostracoderms were bottom-feeders, skimming the surface of the seafloor sucking up food while keeping their eyes (located on tops of their heads) peeled for predators. They flourished through the early Paleozoic and lived alongside other fish groups evolving at the same time. 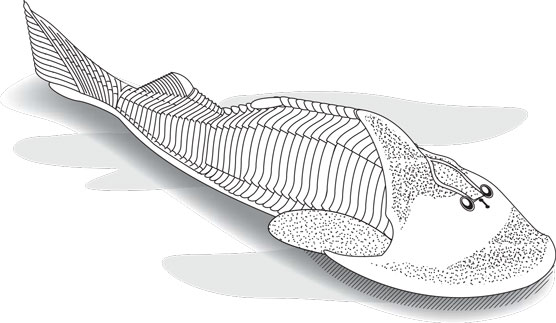 An ostracoderm, the earliest fish.

The earliest fish with jaws belonged to a group called acanthodians that no longer exist. The evolution of jaws appears to be related to the gill structure of early fish. Scientists think the frontal gill supports made of cartilage or bone may have originally become hinged to allow the gills to open wider, taking in more oxygen and also allowing the intake of more food. This feature proved advantageous to their survival and continued to develop through natural selection, resulting eventually in bony hinged jaws. Scientists are still sorting out the details but think that the acanthodians very likely led to later groups of jawed fish, such as the placoderms, cartilaginous fish, and bony fish. (Keep reading for details on these fish groups.)

While the fishes began to evolve in the early Precambrian, they reached their maximum diversity in the Devonian period (about 400 million years ago). For this reason, the Devonian is often called the “Age of the Fishes.” During the 50 million year span of the Devonian period, all the major types of fish are present in the fossil record: ostracoderms, placoderms, cartilaginous fish, and bony fish.

Placoderm fish flourished in the middle to late Paleozoic but do not have any living ancestors today; by the end of the Devonian period they were extinct. The name placoderm means “plate-skinned” and refers to the heavily armored skin of these fish. They survived in both saltwater and freshwater habitats. Some of them, such as the Dunkleosteus, were frightening predators with razor-sharp teeth and body lengths of 10 to 12 meters (more than 30 feet)! The heavily armored head of a Dunkleosteus is illustrated here. 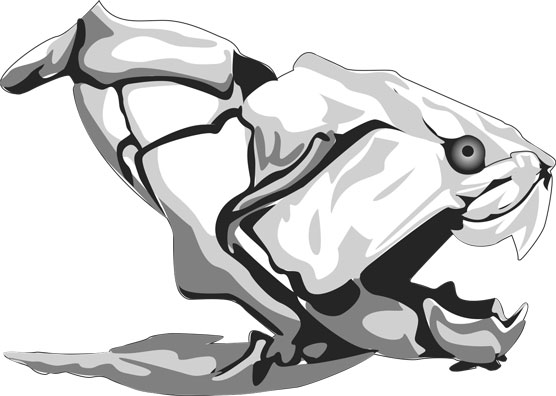 Armored head bones of a Dunkleosteus.

The cartilaginous fish group includes modern sharks and stingrays. These creatures have jaws and teeth, but their internal skeleton is made of cartilage instead of bone. Cartilage is a flexible, sturdy, organic material that is found in many other animals as well; you are most familiar with it because it’s what shapes your ears and nose.

The bony fish are by far the largest and most diverse fish group. Many of the subgroups of bony fish still exist today, and it appears that amphibians evolved from bony fish. The bony fish are separated into two groups:

Among the extinct lobe-finned fish, the crossopterygians group is thought to have given rise to amphibians, which were the first animals to live outside water. The lobed fins of crossopterygians were muscular enough that scientists think they could have propelled these fish across short distances on land, a precursor to fully developed legs in amphibians. Other similarities between the skeletal and tooth structures of these lobe-finned fish and early amphibians are still being studied as scientists fill in the details of early land-dwelling animals.

In the middle Paleozoic, while the fish dominated the seas, amphibians evolved. Amphibians are animals that breathe air and can move comfortably outside of water but still spend the first part of their lives (as eggs and larvae) in the water. By the Devonian period, insects and plants had colonized the land, providing food resources for amphibians when they ventured out of the water.

The discovery of a fossil called Tiktaalik roseae provided scientists with a missing link between water-dwelling and land-dwelling animals. Tiktaalik roseae is informally called a “fishapod” because it had characteristics of both lobe-finned fish and four-legged animals (called tetrapods).

Scientists think that early amphibians developed limbs to help them move around the swampy, shallow water environments of the middle Paleozoic. Amphibians became most diverse and abundant in the late Paleozoic as they spent more time outside the water. It appears that they gave rise to the next major animal group in Earth history: the reptiles.

Adapting to life on land: The reptiles

Reptiles didn’t begin to dominate the earth until the Mesozoic, but they evolved and established themselves — conquering the land for vertebrates — in the late Paleozoic.

In order to live on land, animals had to develop certain characteristics that allowed them to be away from water. Amphibians lived the first stage of their lives in the water and had to return to water to lay their eggs. With the appearance of an amniote egg, reptiles no longer needed water the way amphibians did. An amniote egg is an egg with a yolk sac inside it that provides nutrients to the developing embryo so that when it hatches from the egg, the animal is well past the larval stage and doesn’t need to live in water.

Early reptiles included the pelycosaurs, such as the Dimetrodon fossil pictured in this book’s color photo section. These animals had large fins along their backs. Paleontologists think the fins may have helped them control their body temperature. Reptiles are cold blooded, which means they have no internal way of warming themselves up (unlike warm-blooded animals, who regulate their own body temperature). But the pelycosaurs and their later relatives, the therapsids, may have begun to develop methods of body heat regulation that were precursors to the way mammals control their body temperature.

Reptiles may have been the first animals to dominate the land, but they were not the first living creatures on land. Long before amphibians ventured out of the water, plants had established themselves on land and were living alongside swarms of insects.