What Are Air Pollution, Smog, and Acid Rain?

Air pollution, which can lead to smog and acid rain, is the result of adding compounds or particles to the air that are harmful to human health or the environment. The most obvious danger of air pollution is that humans and other animals inhale pollutants and can become ill. In particular, air pollution leads to lung and respiratory illnesses — including asthma, bronchitis, and emphysema — and various cancers.

Smog originally described the specific combination of smoke and fog that discolored the air as a result of coal burning during the Industrial Revolution, but smog no longer means simply smoke and fog. Nowadays, the term smog refers to the complex combination of primary and secondary pollutants that turn the air a brown or yellow color.

Although smog isn’t isolated to urban areas, it’s more common around cities. One factor that intensifies smog in urban areas is the occurrence of a thermal inversion or temperature inversion in the atmosphere. Generally speaking, the temperature of the air becomes gradually cooler as you move upward in the atmosphere; warm air near the surface moves upward, gradually cooling.

In the case of a temperature inversion, however, atmospheric circulation and geographic factors trap a layer of warm air between two layers of cooler air, inverting or flipping the usual pattern. This figure illustrates what this effect looks like. 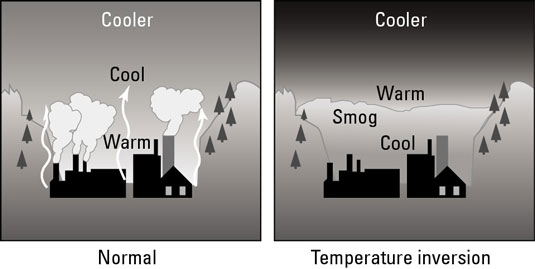 Temperature inversions are most common in valleys where cool mountain air sweeps down into the valley at night, below the warm, polluted air surrounding the city. Los Angeles commonly experiences temperature inversions that trap a smog layer with warm air above and cool air below.

This inversion keeps the smog (and therefore the pollutants) close to the ground instead of allowing it to disperse into the atmosphere. Cities that experience such trapped smog may issue local air quality warnings so that people with asthma or other respiratory troubles know to stay indoors.

Air pollution creates conditions in the atmosphere that change the pH of rainwater (and snow and other precipitation), making it more acidic. This acid rain is an environmental hazard because acidic rainwater damages whatever it falls on.

People first noticed the damage caused by acid rain more than 100 years ago. Folks in the mid-19th century observed that rainfall in heavily polluted cities (such as London during the Industrial Revolution) was dissolving marble and limestone statues. Not until the 1960s did scientists begin to carefully study the sequence of chemical reactions that results in acid rain.

By far, the worst ecosystem damage acid rain causes occurs in aquatic and wetland ecosystems. Acid rain creates acidic conditions in lakes, ponds, rivers, and wetlands, and the organisms in these ecosystems aren’t adapted to survive in that kind of environment. Acidification, or increasing the acidity (lowering the pH) of an aquatic ecosystem, can kill aquatic organisms such as fish and amphibians as well as interfere with their life cycles.

Changing the pH of aquatic ecosystems may also have the side effect of allowing other contaminants (such as metals or toxins) to dissolve into the water and move more freely around the environment.

Normal atmospheric water has a pH of approximately 5.6 because of the natural formation of carbonic acid from atmospheric carbon dioxide gas. Pollutants such as nitrogen oxides and sulfur compounds in the atmosphere create atmospheric water particles that are more acidic than normal with pH values less than 5.