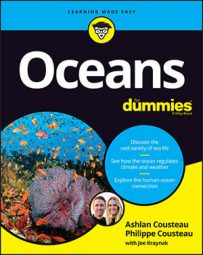 Explore Book Buy On Amazon
The ocean is big — really, really big — both as a body of water and as a topic. It encompasses physical characteristics, its ecosystems and inhabitants, its influence on climate and weather, the sustainable use of its resources, and much more. This Cheat Sheet touches on a few key topics. 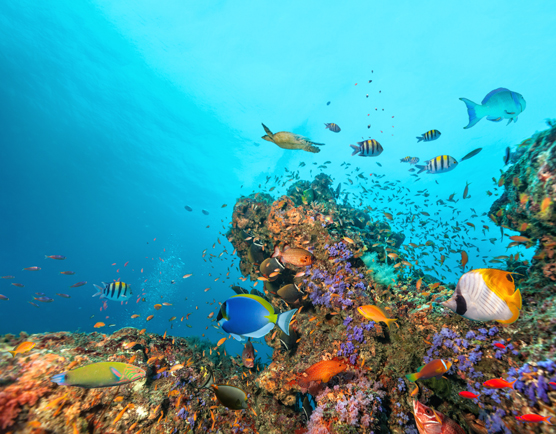 An ecosystem is like a neighborhood in which a variety of lifeforms adapt to the environment and to one another, developing complex interdependencies. If something changes, even a tiny change, it affects everything else. The ocean has a variety of ecosystems, including the following:

Scientists have a formal system called a taxonomy for classifying all lifeforms on Earth. Organisms are classified first by domain, then kingdom, then into progressively smaller groups — phylum, class, order, family, genus, and species. The organism is then named using its genus and species, typically resulting in something that only someone with a PhD in Biology or Latin can pronounce; for example, the scientific name for the southern blue-ringed octopus is Hapalochlaena maculosa. Talk about a mouth full. Plus, these groupings can change and species can be scientifically re-assigned as scientists learn more and discover new things.

In Oceans For Dummies, we simplify the groupings and use the Latin and Greek names only when necessary (they are their proper names of course) or when they have a nice ring to them (aka, it’s easy to pronounce). Accordingly, we classify marine organisms into the following groups:

What about the guys? This is where it gets really freaky. They’re usually much smaller than the females, and when a male finds one of these lovely ladies, he attaches himself to her, as a permanent parasite. After a while, he loses his eyes and all his organs except his testes, physically fusing his body with hers — a case in which moving in together is taken way too far. What’s more is that females can do this body meld thing with multiple mates at the same time (and why not?).

The ocean that cares for us in so many ways is under serious threat from human activities. Here are the ten biggest threats to ocean health:

6 win-win opportunities in the blue economy

The concept of a Blue Economy encourages the sustainable use of ocean resources for economic development, job creation, and improving people’s lives, while at the same time preserving the ocean for future generations. In other words, it involves engaging in profitable activities that benefit the ocean — win-win opportunities. Here are six Blue Economy opportunities:

Ashlan and Philippe Cousteau are world-renowned environmental advocates, filmmakers, and authors with a passion for adventure. Philippe is the founder of EarthEcho International, a leading global voice for ocean conservation. Ashlan is a journalist and storyteller who has explored all seven continents.

Ashlan and Philippe Cousteau are world-renowned environmental advocates, filmmakers, and authors with a passion for adventure. Philippe is the founder of EarthEcho International, a leading global voice for ocean conservation. Ashlan is a journalist and storyteller who has explored all seven continents.

Ralph R. Roberts has been investing in foreclosed properties for over 30 years. He knows every step of the process, from scouting properties to cashing out after the sale, from helping distressed homeowners keep their homes to buying those homes when the owners can no longer afford them. He also has assisted homeowners who have been taken advantage of by unscrupulous investors.