Gastropods: Putting Their One Foot Forward

Explore Book Buy On Amazon
The largest group in the mollusk family (accounting for about 80 percent of all mollusk species), is the class Gastropoda, which literally means a stomach with a foot on it. The name strikes us as more than a little demeaning, not to mention inaccurate—after all, snails and most slugs have easily recognizable heads and a complex anatomy, including a liver, lung, heart, kidney, a primitive brain, and, yes, a stomach. In addition, they’re incredibly diverse.

Gastropods are one of the few groups that have members living in all three main habitats—land, sea/ocean, and freshwater. As a group, they also have a varied diet. Depending on the species, they may be herbivores (plant eaters), scavengers, carnivores, or even internal parasites.

These diverse creatures come in many sizes, some with shells and some without, but they all have a single “foot” they use mostly for locomotion. To move, they excrete mucus and contract their muscles in waves to slide over the surface of hard objects. Think of it as skating over ice that you create in front of you as you move in a certain direction. In this article, we break the family of gastropods down into two groups—snails (with external shells) and slugs (mostly without external shells).

Snails are gastropods that carry their homes on their backs. Many types can retract completely into their homes headfirst and seal them shut with an operculum (a thin, rigid disk attached to the foot of most snails). This door, which is a little softer than the shell, keeps predators out and moisture in, giving them a much wider travel range and enabling them to survive dry conditions.

When you hear the word “snail,” you probably think of the archetypical snail with the spiral shell, but snails are far more diverse, as you’re about to discover. In the following sections, we introduce you to several different types of snails, some of which you may never have imagined being snails.

Abalones, which account for about 60 to 100 gastropod species, are edible gastropods covered by a bowed shell that looks sort of like a flattened helmet with a line of holes along one side used for breathing and excreting wastes. The inside of the shell is lined with mother of pearl, which is commonly used in jewelry and to adorn other objects. Abalones also produce pearls, although they rarely receive much credit for doing so. 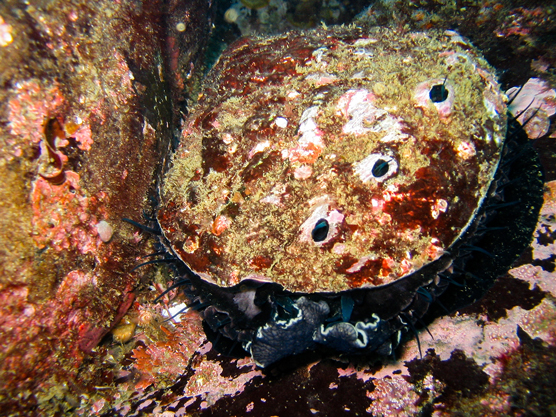 Conch is a general name that refers to medium-to-large mollusks that have a very angular shell with a wide lip. These are the shells you hold up to your ear to hear the sound of the ocean or you blow into to produce a loud sea call (which takes a lot of practice, trust us). Conches have some of the most creative names, such as queen conch (shown), dog conch, and horse conch, the latter of which is a giant predatory gastropod. When it eats something, well . . . it just looks darn nasty—like a massive tongue with no mouth or body slurping something up. 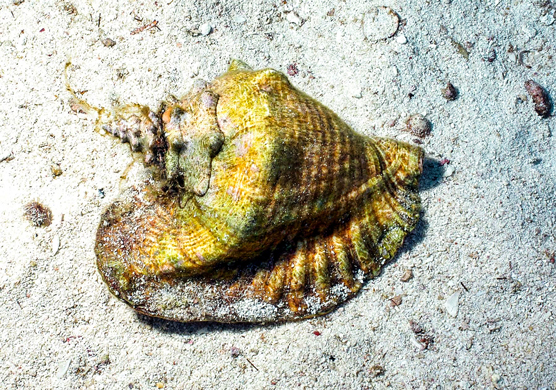 Some conches can produce pearls, which are regarded as some of the rarest and most valuable pearls in the world (even though they’re not a “true pearl” but a calcareous concretion from the conch). Who knew?

Cone snails account for nearly 500 species of venomous, predatory sea snails each equipped with a harpoon containing a large collection of toxins. When its prey gets close to a cone snail, the cone snail fires its harpoon, piercing and the paralyzing (or killing) it, which it then swallows whole. Cone snails are cone shaped (of course) with a long, linear aperture (opening), as shown. 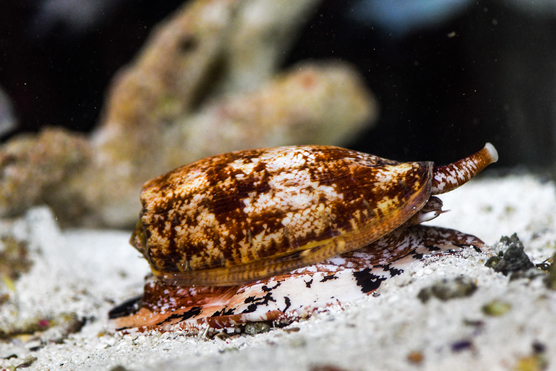 Cowries have a smooth, glossy, domed shell with a long narrow opening. Their mantle has two special folds that the cowrie can wrap around the outside of the shell. These folds are covered with papillae (fleshy, hair-like projections) that may serve as camouflage or enhance respiration. Cowry shells are highly prized among shell collectors and have even been used in days long past as a form of currency.

Limpets have a thick, conical shell and a strong, muscular foot. The shell is difficult for predators to grab hold of or crack, and the limpet uses its foot to draw itself tightly against rocky substrates, making it difficult to pry from the surface. 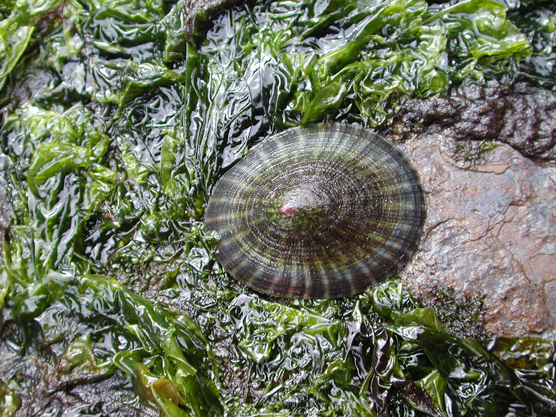 A limpet grazing on algae, notice the scoured rock behind it where it has eaten all the algae

Slipper limpets often live in stacks, like upside-down saucers. Where they are in the stack influences their sex. A large female is usually at the bottom with a small young male on top. When the male releases his sperm, it drops down to fertilize the female’s eggs. Limpets between the top and bottom may be male or female.

Periwinkle is a name used loosely for all small freshwater and marine snails, but true periwinkles are marine snails that can be found in the ocean, on rocky shores, in estuaries and mud flats, and on the roots of mangrove trees. These sweet little gastropods have a small spiral shell built to withstand the constant beating on waves. They are also the favorite food of many seabirds—ducks, in particular, love them!

Whelks are predatory snails that use their radula to drill through the armor of their prey (such as the shell of a mussel) to eat the soft flesh inside. They can also use their foot to take hold of a bivalve (such as a mussel or clam) and use their own shell as a wedge to pry open the shell. The whelk’s shell is similar to that of a conch..

Sea slugs and sea hares are basically homeless snails. At some point in their evolution, they lost their shells, though many species have a tiny internal shell or a small external shell that barely covers their body. What’s cool, though, is that without shells to protect their soft bodies, they’ve evolved several interesting and effective self-defense mechanisms — camouflage; the ability to collect venom from what they eat and use it on their enemies; bold, bright colors to make them look venomous (regardless of whether they truly are); and the ability to detach a part of their bodies (as some reptiles do) and grow them back later.

Now, if you’re thinking, “Slugs, yuck!,” you may be surprised to find out that more than 3,000 species of sea slugs called nudibranchs (which means “naked gills”) include some of the most diverse, colorful, and ornate creatures in the sea. If there were a beauty contest for marine animals, a nudibranch would probably claim the crown year after year.

Some nudibranchs look like florescent hedgehogs, some look like glow-in-the-dark slugs on acid, and some look like gorgeous neon Flamenco dancers. All in all, they’re beautiful underwater gems. Seriously, we could do a whole giant coffee table book on dazzling nudibranchs. 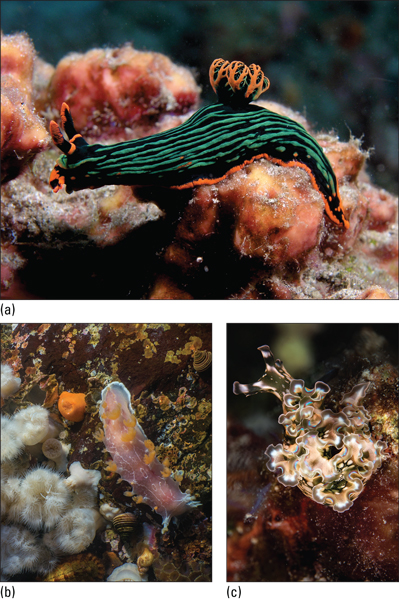 A small gallery of nudibranchs.

Sea hares are very similar to sea slugs, but they have large tentacles that resemble the ears of hares (rabbits), and they have wing-like structures they use for swimming. Some also squirt inky substances that look like a smoke screen but are thought to stimulate food receptors in predators, so they try to eat the substance while the sea hare makes its escape.