How to Predict the Equilibrium Direction of an Acid-Base Reaction

By: Arthur Winter and
Updated: 07-21-2021
From The Book: Organic Chemistry I For Dummies

Explore Book Buy On Amazon
pKa values allow you to predict the equilibrium direction of acid-base chemical reactions for organic molecules. The pKa value of an acid is a quantitative measurement of a molecule’s acidity. The pKa is derived from the equilibrium constant for the acid’s dissociation reaction, Ka, and uses a logarithmic scale to allow the pKa values to span wide ranges.

A brief pKa table of acids is shown here. 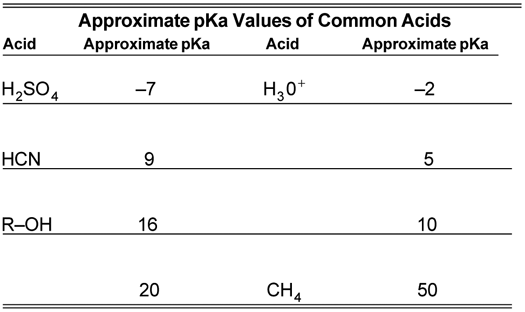 As a rule, the equilibrium of a reaction will favor the side with weaker acids and bases.

For example, you can predict the direction of the acid-base reaction between hydrogen cyanide (HCN) and acetate (C2H3O2–) shown here.