How to Calculate the Empirical Formula of a Compound

By: Peter J. Mikulecky and Chris Hren and
Updated: 07-21-2021
From The Book: Chemistry Workbook For Dummies with Online Practice

Explore Book Buy On Amazon
If you don't know the empirical formula of a compound, you can analyze samples of the unknown compound to identify the percent composition. From there, you calculate the ratios of different types of atoms in the compound. You express these ratios as the empirical formula.

An empirical formula represents the lowest whole-number ratio of elements in a compound.

For the sake of simplicity, assume that you have a total of 100 g of this mystery compound. Therefore, you have 40.0 g of carbon, 6.7 g of hydrogen, and 53.3 g of oxygen. Convert each of these masses to moles by using the gram atomic masses of C, H, and O: 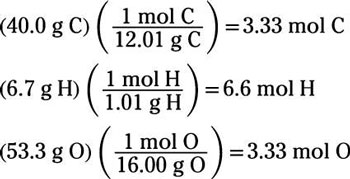 Notice that the carbon and oxygen mole numbers are the same, so you know the ratio of these two elements is 1:1 within the compound. Next, divide all the mole numbers by the smallest among them, which is 3.33. This division yields

The compound has the empirical formula CH2O. The actual number of atoms within each particle of the compound is some multiple of the numbers expressed in this formula.