How to Calculate Endothermic and Exothermic Reactions

By: Peter J. Mikulecky and Chris Hren and
Updated: 07-23-2021
From The Book: Chemistry For Dummies 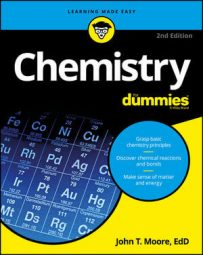 Explore Book Buy On Amazon
By calculating the enthalpy change in a chemical reaction, you can determine whether the reaction is endothermic or exothermic. Chemical reactions transform both matter and energy. Though chemical equations usually list only the matter components of a reaction, you can also consider heat energy as a reactant or product. When chemists are interested in heat flow during a reaction (and when the reaction is run at constant pressure), they may list an enthalpy change

to the right of the reaction equation. At constant pressure, heat flow equals enthalpy change:

tells you the direction of heat flow, but what about the magnitude? The coefficients of a chemical reaction represent molar equivalents, so the value listed for the

refers to the enthalpy change for one mole equivalent of the reaction. Here's an example:

So reaction enthalpy changes (or reaction "heats") are a useful way to measure or predict chemical change. But they're just as useful in dealing with physical changes, like freezing and melting, evaporating and condensing, and others. For example, water (like most substances) absorbs heat as it melts (or fuses) and as it evaporates. Here are the molar enthalpies for such changes:

The same sorts of rules apply to enthalpy changes listed for chemical changes and physical changes. Here's a summary of the rules that apply to both: Try an example: here is a balanced chemical equation for the oxidation of hydrogen gas to form liquid water, along with the corresponding enthalpy change:

How much electrical energy must be expended to perform electrolysis of 3.76 mol of liquid water, converting that water into hydrogen gas and oxygen gas?

First, recognize that the given enthalpy change is for the reverse of the electrolysis reaction, so you must reverse its sign from –572 kJ to 572 kJ. Second, recall that heats of reaction are proportional to the amount of substance reacting (2 mol of H2O in this case), so the calculation is

John T. Moore, EdD, is regents professor of Chemistry at Stephen F. Austin State University, where he is also the director of the Teaching Excellence Center. He is the coauthor of Biochemistry For Dummies and Organic Chemistry II For Dummies.