Explore Book Buy On Amazon
Many of the things we deal with in life are related either directly or indirectly to electrochemical reactions. The Daniell cell is an electrochemical cell named after John Frederic Daniell, the British chemist who invented it in 1836.

A galvanic or voltaic cell is a redox reaction that produces electricity. The following diagram shows a Daniell cell that uses the Zn/Cu²⁺ reaction. This reaction may be separated out so that you have an indirect electron transfer and can produce some useable electricity.

Galvanic cells are commonly called batteries, but sometimes this name is somewhat incorrect. A battery is composed of two or more cells connected together. You put a battery in your car, but you put a cell into your flashlight. 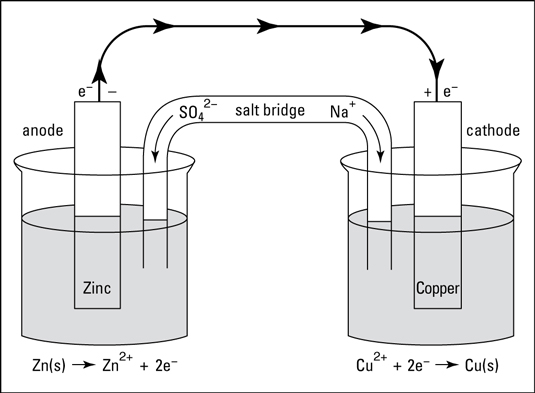 The electrodes act as a terminal, or a holding place, for electrons. A wire connects the electrodes, but nothing happens until you put a salt bridge between the two containers. The salt bridge, normally a U-shaped hollow tube filled with a concentrated salt solution, provides a way for ions to move from one container to the other to keep the solutions electrically neutral.

This cell will produce a little over one volt. You can get just a little more voltage if you make the solutions that the electrodes are in very concentrated.