Understanding the Transmission of Nerve Impulses

Nerve impulses have a domino effect. Each neuron receives an impulse and must pass it on to the next neuron and make sure the correct impulse continues on its path. Through a chain of chemical events, the dendrites (part of a neuron) pick up an impulse that's shuttled through the axon and transmitted to the next neuron. The entire impulse passes through a neuron in about seven milliseconds — faster than a lightning strike. Here's what happens in just six easy steps: 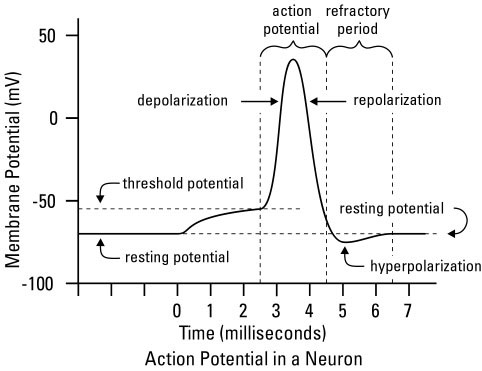 Transmission of a nerve impulse: Resting potential and action potential.

Like the gaps between the Schwann cells on an insulated axon, a gap called a synapse or synaptic cleft separates the axon of one neuron and the dendrites of the next neuron. Neurons don't touch. The signal must traverse the synapse to continue on its path through the nervous system. Electrical conduction carries an impulse across synapses in the brain, but in other parts of the body, impulses are carried across synapses as the following chemical changes occur: