The Types of Skeletal Systems

Explore Book Buy On Amazon
Skeletons support animals, give their bodies shape, and protect their internal organs, but not all animals have the same type of skeleton. Following are the three different kinds of skeletons you may see in your study of biology:

All vertebrate skeletons— whether they belong to humans, snakes, bats, or whales — developed from the same ancestral skeleton (which explains why you may notice similarities between your skeleton and that of your pet dog or cat). Today, these animals show their relationship to each other in part due to homologous structures — structures that are equivalent to each other in their origin.

All vertebrates’ skeletons, whether yours, a whale’s, or a cat’s, have two main parts:

In some vertebrates, such as snakes, the appendicular skeleton has become extremely reduced or nonexistent. 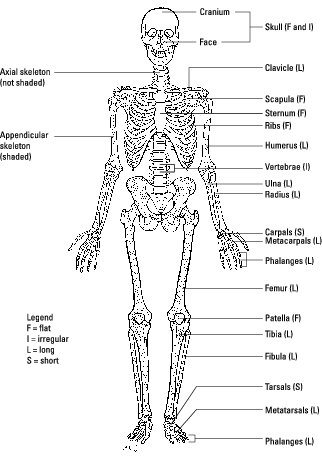 Boning up on bones

If you’ve ever watched an old Western movie, you’ve probably seen images of bones bleached white by the Sun and scattered alongside a pioneer trail. The dry white bones of these images are very different from the living bones that are in your body right now. Bone is actually a moist, living tissue that contains different layers and cell types.

The tissues found within living bone fall into two categories:

Joints are structures where two bones are attached so that bones can move relative to each other. Bones are held together at joints by ligaments, which are strong, fibrous, connective tissues.

Three different types of joints enable the many movements of animals: