The Transport Systems of Cells

Cells are able to take up nutrients from the environment thanks to membrane-spanning transporter proteins. Different types of transporters are required to transport the wide range of nutrients that cells need, but this often comes at an energy cost because the cell must build up internal stores at higher concentrations than those found in the environment. Nevertheless, it’s worth the price because these nutrients are vital for survival.

Coasting with the current: Passive transport

Imagine that you’re kayaking in a river and you stop paddling. Your kayak will travel in the direction of the current and slow to a stop once you reach a calm area. You don’t have to use your paddle. Similarly, passive transport doesn’t require energy from the cell. 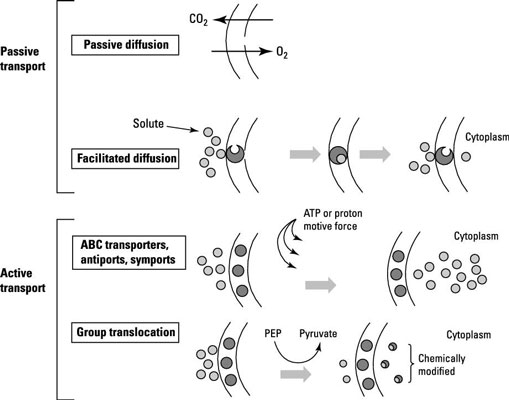 Passive transport is called diffusion and there are two kinds:

Active transport is the movement of molecules against a concentration gradient and requires energy from the cell. In this case, you need to do a lot of paddling in your kayak if you want to go upstream! These types of transporters are usually specific for the molecule or ion they need to transport. This specificity helps the cell to maintain optimal levels of each molecule or ion.

Here are some active transport systems:

Sometimes cells accumulate substances that interfere with their regular function. To get rid of these unwanted substances, protein transporters work as efflux pumps to send molecules outside the cell. Some efflux pumps are selective to the molecule they export, while others are able to export a variety of unrelated molecules.

In both cases, efflux pumps must use energy (ATP). The types of toxins that a cell may export include dyes, detergents, host-derived antimicrobials, and antibiotics.

Transport proteins allow flow between contents within a cell and the environment, but it’s important that the exchange of molecules is regulated — it’s a waste of energy to transport nutrients if they’re not needed.

The cell makes transporters when it senses that it’s low in supply of a specific nutrient. Because transporters are selective for the substrate they transport, they help build that supply back up, and when their work is done, they’re no longer made.