The Shapes of Cells

By: Jennifer Stearns and Michael Surette and
Updated: 11-25-2019
From The Book: Microbiology For Dummies

Explore Book Buy On Amazon
Prokaryotic cells come in many different shapes and sizes that you can see under a microscope. A description of the shape of a cell is called the cell morphology. The most common cell morphologies are cocci (spherical) and bacilli (rods).

Coccibacillus are a mix of both, while vibrio are shaped like a comma, spirilla are shaped like a helix (a spiral, sort of like a stretched-out Slinky), and spirochetes are twisted like a screw. The illustration shows these common cell morphologies. 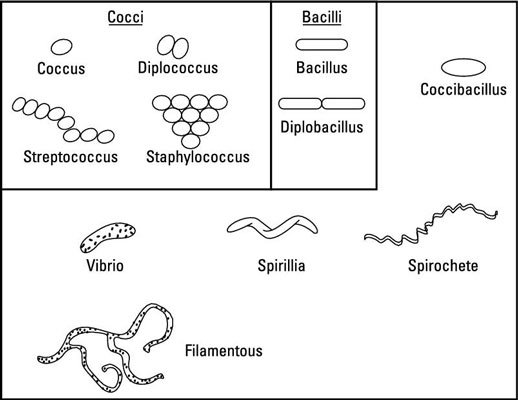 Although prokaryotes are unicellular organisms, their cells can be arranged in a few different ways, like chains or clusters, depending on how the cells divide:

The shape of a cell is encoded in its genes. Although it's known how cell shape is controlled, the reason behind the many different shapes remains a mystery.

Morphology is a descriptive characteristic — it doesn’t give you enough information to know exactly what type of bacteria you’re looking at or its function.