The message contained within an mRNA is converted to protein through translation, where the genetic code is deciphered into amino acids. The bases in mRNA are decoded in threes into codons, each of which encodes an amino acid; there are 20 amino acids. Several different codons encode the same amino acid. 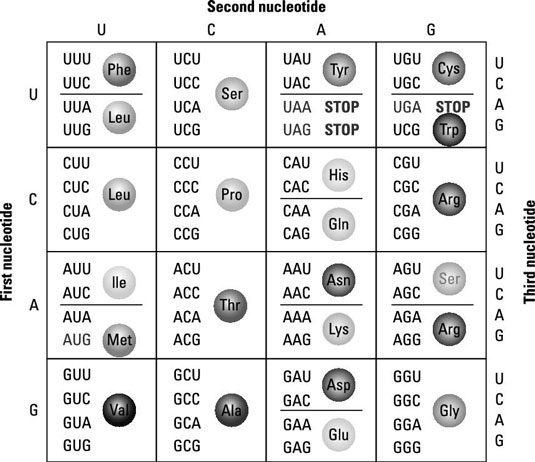 Making a protein involves stringing together many amino acids into a long chain, which then folds into the shape it needs to be in to perform its function. Amino acids have different properties.

There are many important players in protein synthesis, but two in particular have crucial jobs:

A peptide chain is a newly formed protein made up of amino acids covalently bonded by peptide bonds.

In eukaryotes the process is similar with a few key differences:

The peptide chain then folds properly either on its own or with the help of other proteins. After it’s sent to the proper location in the cell, the freshly made protein will be ready to perform its function in the cell. Some bacterial proteins need to be secreted to the periplasm (the space between the inner membrane and the outer membrane in Gram-negative bacteria) or inserted into the membrane.

Proteins to be secreted have a signal peptide that is around 10 to 15 amino acids long. The signal peptide is bound by other proteins that will shuttle them to the area in the membrane where they can be exported from the cytoplasm.