Standard Deviation, Variance, and Coefficient of Variation of Biostatistics Data

By: John Pezzullo and
Updated: 03-26-2016
From The Book: Biostatistics For Dummies

The standard deviation (usually abbreviated SD, sd, or just s) of a bunch of numbers tells you how much the individual numbers tend to differ (in either direction) from the mean. It's calculated as follows:

This formula is saying that you calculate the standard deviation of a set of N numbers (Xi) by subtracting the mean from each value to get the deviation (di) of each value from the mean, squaring each of these deviations, adding up the

terms, dividing by N – 1, and then taking the square root.

This is almost identical to the formula for the root-mean-square deviation of the points from the mean, except that it has N – 1 in the denominator instead of N. This difference occurs because the sample mean is used as an approximation of the true population mean (which you don't know). If the true mean were available to use, the denominator would be N.

When talking about population distributions, the SD describes the width of the distribution curve. The figure shows three normal distributions. They all have a mean of zero, but they have different standard deviations and, therefore, different widths. Each distribution curve has a total area of exactly 1.0, so the peak height is smaller when the SD is larger. 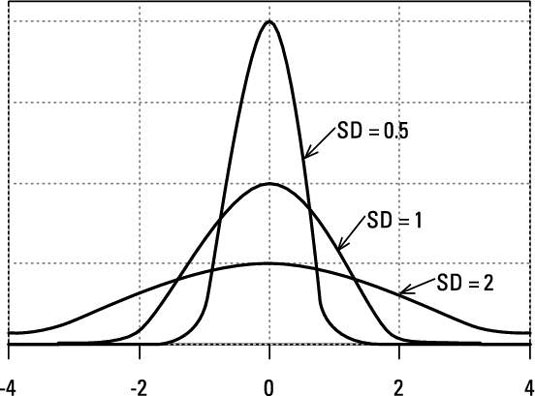 Standard deviations are very sensitive to extreme values (outliers) in the data. For example, if the highest value in the IQ dataset had been 150 instead of 116, the SD would have gone up from 14.4 to 23.9.

Several other useful measures of dispersion are related to the SD: