How Does the Human Digestive System Work?

Explore Book Buy On Amazon
The human digestive system breaks down the food you consume, using as much of the nutrients as possible to fuel the body. After the energy is extracted from food through the digestion process and metabolism, the remainder is excreted, or removed.

Imagine biting into a big, juicy cheeseburger. As you taste it, enzyme in your saliva — salivary amylase — is there to start digesting the carbohydrates, most likely those in the bun. Go ahead and take a real bite. Chew slowly so that your teeth can break down some of that food. Swallow and pay attention to the feeling of the bits of food being squeezed down your esophagus into your stomach. That action is called peristalsis, and it occurs throughout your entire digestive tract. 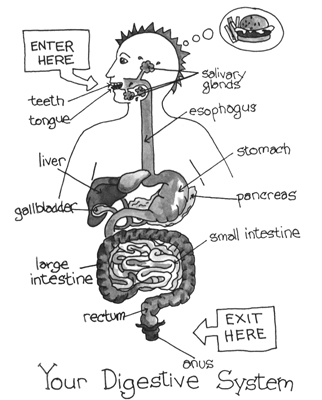 Once the cheeseburger bits are in your stomach, they are referred to as a bolus. The bolus is drowned in gastric juice, which is made up of the enzyme pepsin and hydrochloric acid (HCl).

If you eat too much, your stomach produces more acid, and the contents of your overly full stomach can be forced back up into the esophagus, which runs in front of the heart, giving you heartburn.

The enzyme and acid act to break down the food and release the nutrients. The carbohydrates, protein, and fat in foods you consume all are important for proper nutrition (it’s excesses of them that get you in trouble!), but they must be in their smallest forms to be used by each cell. This final stage in digestion occurs in the small intestine.

Digested food from the stomach is pumped into the small intestine, which gets flooded with fluid and enzymes from the liver (bile) and the pancreas (pancreatic amylase, trypsin, and lipase).

Those chemicals help to break the molecules from the digesting food into its smallest components. The smallest form of carbohydrate is glucose, which is a sugar molecule. Proteins can be reduced to amino acids; fats can be reduced to fatty acids and glycerol. The smallest forms of the nutrients pass through the walls of the small intestine and are absorbed into the bloodstream.

The scoop on poop

The useable nutrients are absorbed into the bloodstream from the small intestine. The leftover material continues on to the large intestine, where fecal matter (feces, or “poop”) is created. The large intestine absorbs water and some electrolytes from the leftover material, and that water is returned to the body to prevent dehydration. If too much water is absorbed, constipation occurs; if too little water is absorbed, diarrhea occurs.

Back to the bloodstream

The walls of capillaries are very, very thin. Just outside of the capillary walls is a fluid called interstitial fluid. This fluid fills every space between every cell in the body, cushioning and hydrating the cells, and serving as part of the “matrix” through which nutrients and wastes are passed.