Phototrophs are able to capture the energy in light thanks to photosynthetic pigments, like chlorophyll and bacteriochlorophyll, which absorb light energy kicking off a process that eventually results in the production of ATP.

The overall structure of these two pigments is very similar. They both have the distinctive tetrapyrrole ring with a Mg2+ in the center and a long 20-carbon phytol tail that helps anchor them to the photosynthetic membrane. The differences occur in the substitutions around the ring and in the length and substitutions on the phytol tail. 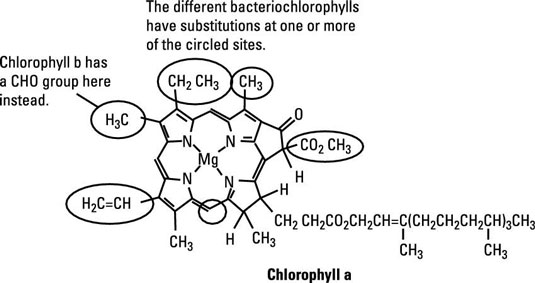 Here is a list of the known types of chlorophyll and bacteriochlorophyll:

Another kind of photosynthetic pigment found originally in marine archaea but now known to be more widespread in the ocean is bacteriorhodopsin. Membrane proteins bind retinal pigments forming a light-driven proton pump. Most of them absorb green light (between 500 nm and 650 nm) and appear purple.

This relatively simple pigment captures light without accessory pigments to act as antenna. The exact mechanisms of bacteriorhodopsin-driven carbon fixation are still being studied. Since their recent discovery, several other bacteria and archaea have been found to have bacteriorhodopsins with different adsorption spectra, allowing them to live at different water depths where the wavelengths of light available are filtered as depth increases.

The kind of pigment-binding proteins present determine the absorption maxima for an organism. The absorption maxima is the range of wavelengths of light that provide the most energy to that organism. There are many types of these pigment-binding proteins, and their position around the light-harvesting pigments can change the spectrum of light absorbed.

The combination of light-harvesting pigments and pigment-binding proteins is called the photocomplex and always occur within a membrane. The arrangement within a membrane is essential for creating the proton motive force necessary to generate ATP.

The photocomplexes are organized so that there is a central reaction center (usually made of chlorophyll or bacteriochlorophyll) around which as many as 300 accessory pigments are arranged to gather up the light energy and pass it to the reaction center.

When the surrounding pigments contain additional chlorophyll or bacteriochlorophylls, they’re appropriately called antennae, because they absorb as much light as possible and funnel it to the reaction center. The pigments in the reaction center participate directly in the reactions involved in converting light energy to chemical energy. This setup is especially essential for phototrophs that live in low light conditions.

Photosynthetic membranes, which house the photocomplexes, occur in all phototrophs, but their structure can be very different in each organism. In eukaryotes, which have cellular compartments called organelles, it’s common to find structures called chloroplasts.

Chlorplasts contain thylakoid membranes arranged in stacks called grana and participate in generating the proton motive force during photosynthesis. In microorganisms that don’t have traditional organelles, like the bacteria and archaea, a variety of photosynthetic membranes can be found: