Explore Book Buy On Amazon
Geneticists use their own unique shorthand when analyzing the results from a genetic cross (a mating between two organisms with characteristics that scientists want to study). For example, they might use a letter of the alphabet to stand for each gene, capitalizing the letter for dominant alleles and using lowercase to represent recessive alleles. The same letter of the alphabet is used for each allele to show that they’re variations of the same gene.

For the cross Mendel did between tall and short pea plants the letter T can be used to represent the gene for plant height. Here, the dominant allele for tallness is shown as T, whereas the recessive allele for shortness is shown as t. 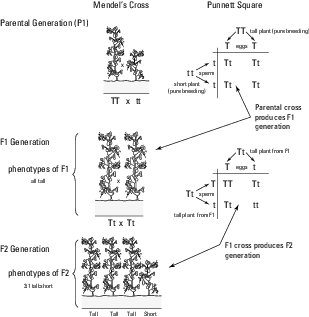 Geneticists also have special terms for describing the genes and appearance of organisms involved in a genetic cross. Here they are:

A tool called a Punnett square helps geneticists predict what kinds of offspring might result from a particular genetic cross. Above, the second Punnett square shows the cross between the peas of the F1 generation. Geneticists write the alleles that each parent can contribute to the offspring along the sides of the square. All possible combinations of alleles that could result in the next generation from the meeting of sperm and egg are drawn within the square.

If Mendel had used modern genetic notation and terminology, he might have analyzed his experiment like this: