Culturing Microbes in the Lab

If you’re interested in studying a particular microbe in a laboratory, you’ll need to create an environment that will accommodate its growth well. Culture media contains all the things that a microbe needs for growth. Culture conditions are conditions that are within the microbe’s growth optima (external environmental conditions that allow for the optimal growth of the organism).

The culture medium used for a particular microbe must contain all the chemical requirements for that organism, as well as have the right pH and solute concentration and be incubated at the right temperature and oxygen conditions. Here are some of the different kinds of culture media:

Many media types exist that are both selective and differential so as to quickly grow and identify particular microbes.

Each of these types of media can be used as a liquid or as a solid. To make the solid version of each medium, agar (a substance extracted from algae) is added to the medium and then it’s heated (usually during sterilization). The mixture is poured into a container. Upon cooling, the agar sets the medium into a semisolid form on which microbial cultures can grow.

Obtaining a pure culture of a microbe of interest is accomplished by inoculating a plate of solid media in a specific way. In the figure, the black lines show what you would actually draw on an agar plate using a stick or a loop as a “drawing tool” after having touched it to some bacteria.

The bottom part of the figure shows where the bacteria would grow (the circles) following along the lines you “drew.” As the microbes are spread across the plate in the way shown, they are diluted out so that single colonies can be isolated. Colonies that look similar are likely from the same organism. 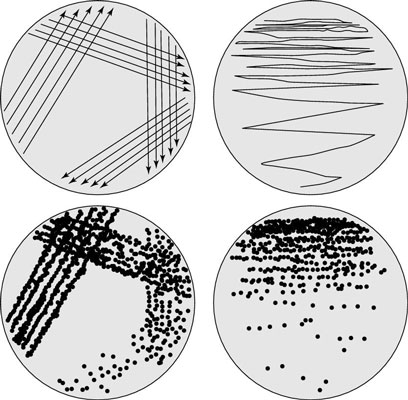 For microbes that require anoxic (free of oxygen) conditions, there are a couple ways to exclude oxygen from the growing conditions. The first involves a sealed jar containing a chemical combination that produces hydrogen (H2) and carbon dioxide (CO2). The hydrogen combines with the oxygen (O2) in the presence of the catalyst to form water.

The other method is with a large chamber that is purged with an inert gas, usually nitrogen gas (N2), which replaces regular air.

Some microbes — namely, the ones that live in animals — can grow only with elevated levels of CO2. The range of CO2 needed is usually between 3 percent and 5 percent and can be achieved by lighting a candle in a sealed jar or using more modern growth chambers specifically designed to regulate the amount of CO2.

The biosafety level of a microorganism is the level of precaution needed when working with it and is based on its known ability to cause human disease. Biosafety levels start at 1 (safest) and go to 4 (hot zone) and have been decided for all microbes on which research is performed.

To work with a level 3 pathogen, special containment rooms and equipment are required that keep everything under negative pressure and filter all air coming out of them. Level 4 pathogens require the same precautions, plus personnel have to wear protective suits that have their own air supply.