Amino acids have an amino group bonded to a carbon skeleton. Each amino acid has one or more special side groups or chains (R) that give it a specific structure or function. Making amino acids from scratch is very expensive in terms of energy, so microbes try their best to get them from their environment.

When they can’t get them from outside, however, they use a kind of template method to reduce the amount of energy spent on different biosynthesis pathways. 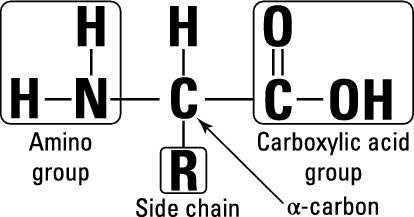 Amino acid biosynthesis starts with a carbon skeleton, made from intermediates of the citric acid cycle or glycolysis. A few different skeletons can be used in the production of several different amino acids, and what you get are classes of amino acids where the members of each class have a similar structure.

The next step is attachment of an amino group to the carbon structure. The amino group can be taken from ammonia (NH3) in the environment and used to make glutamate or glutamine. Depending on the availability of ammonia, the enzymes used are either

Here’s the second frugal thing that microbes do: After glutamine and glutamate are made, the amino group can be used in all the other 20 amino acids.

When it can’t be avoided, microbes make two different nucleotide templates (one for purines and one for pyrimidines) that they modify to make other variants. This saves the expense of having a bunch of complex pathways for nucleotide biosynthesis at work in the cell.

The two classes of nucleotides that arise are the purines and the pyrimidines. The first key purine made is inosinic acid, from all kinds of carbon and nitrogen sources. Once made, it’s modified to produce the main purines adenine and guanine. The first key pyrimidine made is uridylate, which is then modified into thyamine, cytosine, and uracil.

The structure of complete nucleotides is shown here. They have a purine or pyrimidine ring attached to three phosphates (PO3–) and a ribose sugar backbone. After they’re formed, they can either be used directly in RNA or the ribose can be modified, by reduction to deoxyribose, and be used in DNA. 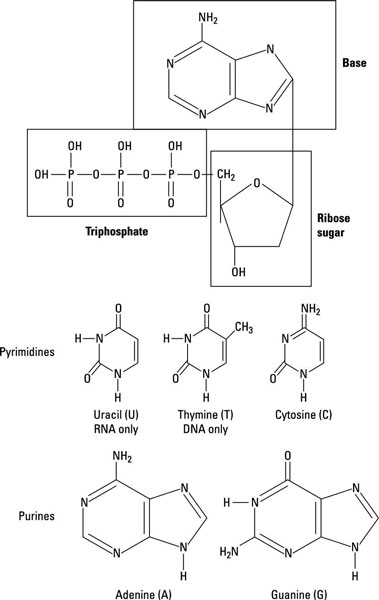