Think of it as a gatekeeper, guardian, or border guard. Despite being only 6 to 10 nanometers thick and visible only through an electron microscope, the cell membrane keeps the cell’s cytoplasm in place and lets only select materials enter and depart the cell as needed.

This semipermeability, or selective permeability, is a result of a double layer (bilayer) of phospholipid molecules interspersed with protein molecules. The outer surface of each layer is made up of tightly packed hydrophilic (or water-loving) polar heads. Inside, between the two layers, you find hydrophobic (or water-fearing) nonpolar tails consisting of fatty acid chains.

Cholesterol molecules between the phospholipid molecules give the otherwise elastic membrane stability and make it less permeable to water-soluble substances. Both cytoplasm and the matrix, the material in which cells lie, are primarily water. The polar heads electrostatically attract polarized water molecules while the nonpolar tails lie between the layers, shielded from water and creating a dry middle layer.

The membrane’s interior is made up of oily fatty acid molecules that are electrostatically symmetric, or nonpolarized. Lipid-soluble molecules can pass through this layer, but water-soluble molecules such as amino acids, sugars, and proteins cannot, instead moving through the membrane via transport channels made by embedded channel proteins. Because phospholipids have both polar and nonpolar regions, they’re also called amphipathic molecules. 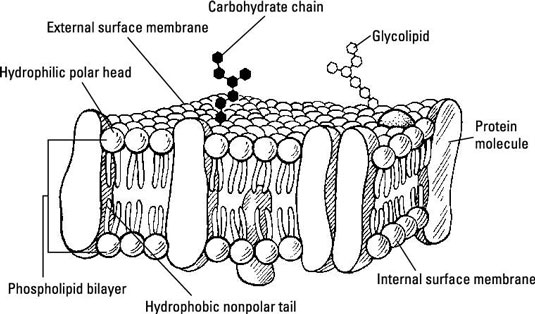 The cell membrane is designed to hold the cell together and to isolate it as a distinct functional unit of protoplasm. Although it can spontaneously repair minor tears, severe damage to the membrane will cause the cell to disintegrate. The membrane is picky about which molecules it lets in or out. It allows movement across its barrier by diffusion, osmosis, or active transport.

Diffusion is a natural phenomenon with observable effects like Brownian motion. Molecules or other particles spontaneously spread, or migrate, from areas of higher concentration to areas of lower concentration until equilibrium occurs. At equilibrium, diffusion continues, but the net flow balances except for random fluctuations.

This occurs because all molecules possess kinetic energy of random motion. They move at high speeds, colliding with one another, changing directions, and moving away from areas of greater concentration to areas of lower concentration. The diffusion rate depends on the mass and temperature of the molecule; lighter and warmer molecules move faster.

Diffusion is one form of passive transport that doesn’t require the expenditure of cellular energy. A molecule can diffuse passively through the cell membrane if it’s lipid-soluble, uncharged, and very small, or if a carrier molecule can assist it. The unassisted diffusion of very small or lipid-soluble particles is called simple diffusion. The assisted process is known as facilitated diffusion.

The cell membrane allows nonpolar molecules (those that don’t readily bond with water) to flow from an area where they’re highly concentrated to an area where they’re less concentrated. Embedded in the membrane are transmembrane protein molecules called channel proteins that traverse from the outer layer to the inner layer and create diffusion-friendly openings for molecules to move through.

Osmosis is a form of passive transport that’s similar to diffusion and involves a solvent moving through a selectively permeable or semipermeable membrane from an area of higher concentration to an area of lower concentration. Solutions are composed of two parts: a solvent and a solute.

Typically, a cell contains a roughly 1 percent saline solution — in other words, 1 percent salt (solute) and 99 percent water (solvent). Water is a polar molecule that will not pass through the lipid bilayer; however, it’s small enough to move through the pores — formed by protein molecules — of most cell membranes.

Osmosis occurs when there’s a difference in molecular concentration of water on the two sides of the membrane. The membrane allows the solvent (water) to move through but keeps out the solute (the particles dissolved in the water).

Active transport lets cells obtain nutrients that can’t pass through the membrane by other means. In addition, there are secondary active transport processes that are similar to diffusion but instead use imbalances in electrostatic forces to move molecules across the membrane.