Proteins are essential building blocks for all living systems, which helps explain why the word is derived from the Greek term proteios, meaning “holding first place.” Cells use proteins to perform a variety of functions, including providing structural support and catalyzing reactions.

Cells synthesize proteins through a systematic procedure that begins in the nucleus when the gene code for a certain protein is transcribed from the cell’s DNA into messenger RNA, or mRNA. The mRNA moves through nuclear pores to the rough endoplasmic reticulum (RER), where ribosomes translate the message one codon of three nucleotides, or base pairs, at a time.

The ribosome uses transfer RNA, or tRNA, to fetch each required amino acid and then link them together through peptide bonds, also known as amide bonds, to form proteins. 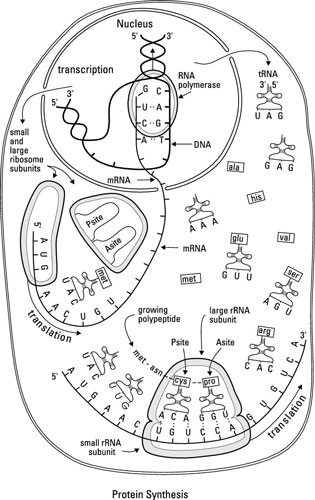 Both antibodies and hormones also are proteins, along with almost everything else in the body — hair, muscle, cartilage, and so on. Even the four basic blood types — A, B, AB, and O — are differentiated by the proteins (antigens) found in each.