Explore Book Buy On Amazon
Although they're astoundingly varied, cells are also remarkably alike. All cells, at least all eukaryotic cells, are alike. Plants, animals, and fungi are eukaryotes (organisms made up of eukaryotic cells), and all their cells, in all their enormous complexity and variation, are fundamentally alike.

Yes, your skin cells, your kidney cells, and your bone cells are fundamentally similar to the leaf cells and root cells of a carrot; the cells of a mold, mushroom, or yeast; and the single cell of microorganisms called protists that live in water and soil.

Here's a simplistic description of a eukaryotic cell: It's a membrane-bound sac containing smaller but distinctive structures, called organelles ("little organs"), suspended in a gel-like matrix called the cytoplasm.

The term eukaryote is derived from the Greek term karyos, meaning "nut" or "kernel," which early biologists used to refer to the nucleus. The figure shows the general structure of a eukaryotic cell. 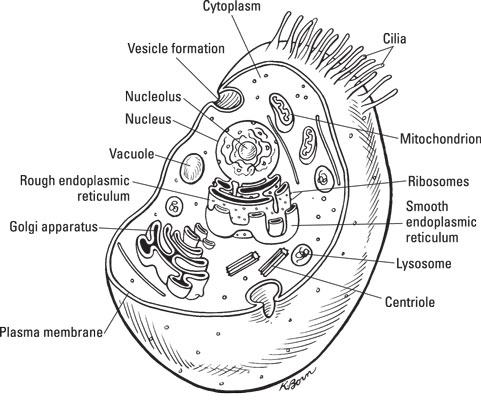 A cutaway view of a basic animal cell and its organelles.

The following table gives you an overview of the structures found within a eukaryotic cell.