How to Get Reviews from Others for Your Digital Film

Whatever you think of your digital film, don’t let that stop you from sharing it and getting feedback from other people. Your audience’s thoughts and opinions on your film are important to the development of your skills as a filmmaker.

Aim to get as many reviews as possible. Choosing reviewers from different ages and genders will give you a clearer and more fair result. It’s good if you can get some feedback from people you don’t know as well, since they are more likely to openly admit how they feel about your film. People who know you often can either be too critical or negative, or too positive and can fail to highlight areas for improvement.

You want to get as many reviews as possible so you can choose the comments to apply to your next project. When you ask people for their opinion or to review your film, ask them for an honest opinion because they may only give you the answer you want to hear.

Another way to receive feedback and reviews is to allow people to comment on your film when you share it to YouTube or another video hosting site. Most people will give honest feedback to encourage and help you, but sometimes you may find that some people post negative or bad feedback on a video for no reason than just to try and upset you.

Unfortunately, such people exist in the world. Remember to control the comments you get on your film by changing the settings when you post your video. You can choose to accept or decline the comments as they come in before they’re posted below your video.

To make sure you get a fair and honest review of your film, ask people to complete a review form. 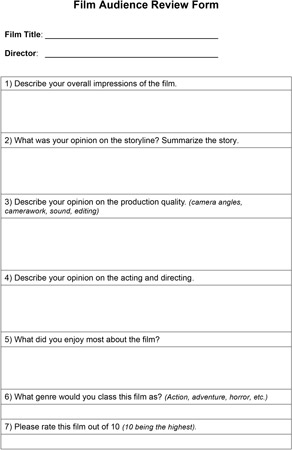 Get honest feedback with a review form.

Another way to get honest and useful feedback on your film is to ask professional filmmakers for their comments. There are loads of filmmakers online, many of whom may be willing to offer their thoughts on your film. An alternative to this is to submit your films into local or online film festivals.

There are many different types, including youth film festivals, which would be a good place to start. At these festivals, you’ll have your film viewed by people you don’t know and professionals from the film and video industry. Most of these festivals will offer reviews from the judges, which is likely to be helpful and encouraging.