By: Bryan Michael Stoller and
Updated: 11-14-2022
From The Book: Filmmaking For Dummies 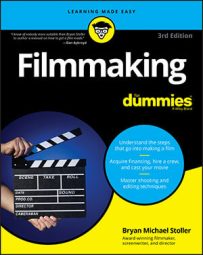 Explore Book Buy On Amazon
Special effects aren’t just limited to illusions that look real only through the camera lens or after the postproduction stage of your film. Makeup is make-believe that can walk and talk without the magic of the camera but through the magic of talented makeup artists. Many people think of beauty makeovers when they think of makeup artists. You don’t normally think of monsters, alien creatures, and flesh wounds — but the world of the makeup artist is a broad one.

Prosthetics is a term associated with artificial limbs. In the world of special effects makeup, however, prostheses are used to create additional limbs, burn victims, and monster effects (often all the sick, gross stuff). Prosthetic pieces, also called appliances, are usually made of foam latex, which can move much like human skin and muscles. Makeup effects artist David Miller designed the conehead makeup for Dan Aykroyd and the entire Conehead population in the film Coneheads. He also designed Freddy Krueger’s makeup for the Nightmare on Elm Street films. (Miller was working late one night trying to decide on the look of Freddy Krueger and glanced down at his melted cheese pizza — inspiration hit!) By gluing latex prosthetics in sections over his face and head Christian Bale was completely unrecognizable as Vice President Dick Cheney in the film Vice.

You can also do mechanical makeup effects, like a head-cast made from an actor with features added to a fake head. I made a cameo appearance as a werewolf in one of my short films several years ago. My sister Marlene, a professional makeup artist, and makeup artist Jack Bricker took a cast of my head by pouring plaster over my face, leaving straws in my nostrils so I could breathe (that was the only time in my life that I’ve ever been plastered). When the plaster dried, they used the mold to design the werewolf head in latex and added hair and an extended muzzle to the dummy head. To save time and money, they only made a half-head because the final shot was a profile, and the camera would never see the other side. 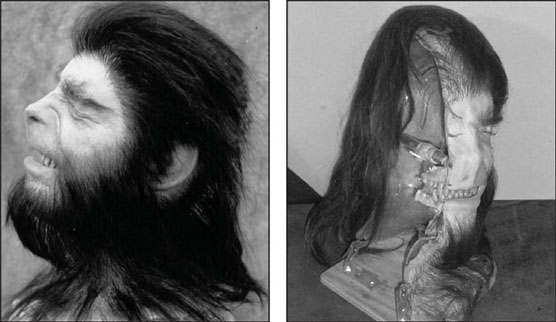 Front and profile shots of a foam werewolf head.

Remember Michael Jackson in Thriller with the devilish eyes? Jim Carrey’s strange eyes in The Mask, and The Grinch? What about the White Walkers with the ice-blue eyes in Game of Thrones? The apes with the black eyes in Stanley Kubrick’s 2001: A Space Odyssey? The actors all had to wear special contact lenses. These special lenses are called scleral lenses, which have funky pupil designs and are fitted to cover the actor’s eyes like conventional contact lenses.

Linda Blair wore scleral contact lenses for The Exorcist and then again when I revisited her possessed state in my comedy spoof The Linda Blair Witch Project (see the following figure), where she finds out she’s possessed by famous comedians (did you know that possession is nine-tenths of the law?). You can stream my short on YouTube. 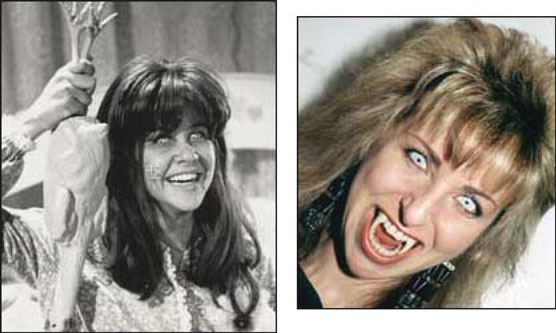 An example of scleral lenses and vampire teeth.

Be sure to purchase scleral lenses from an optometrist or from eyewear specialists like Dr. Morton Greenspoon and Dr. Richard Silver, who have designed and provided special scleral lenses for many Hollywood blockbusters (including The Grinch and Men in Black). Although specialty stores, especially during Halloween, carry designer effects lenses, you don’t know if they’re made by a reputable company, and the lenses aren’t fitted to your particular eye shape. Not only could they cause discomfort or infection, but worse, damage to your cornea. Always consult an ophthalmologist before putting anything in your eyes!

Take a bite out of this

Another skill of the special-effect makeup artist is designing and creating teeth that fit over the actor’s own bite. A mold is taken of the actor’s real teeth — very similar to how a dentist takes a mold impression to fit you for a crown or veneers. The artist then sculpts a new set of molars — from ghoulish monster or vampire teeth to rotten buck teeth like Austin Powers. Refer to the preceding figure for an example of vampire teeth that fit over the actor’s own incisors.

Pulling out your hair with lace hairpieces

Lace hairpieces, including beards and mustaches, are used on almost every movie, and quite often on the main actors. Sean Connery wore a lace hairpiece throughout all his James Bond movies. You’ve often seen actors that you know are bald in real life sprouting a beautiful head of hair for their latest starring role. Even actors with hair have been known to wear lace pieces when they are becoming a different person on screen, as, for example, Tom Hanks playing Fred Rogers in A Beautiful Day in the Neighborhood. Lace hairpieces are created by a specialty makeup and or hair artist. Ron Wolek designed and meticulously punched one hair at a time into a piece of lace netting for Ed Asner’s Santa Claus beard in my film Santa Stole Our Dog. Real hair or yak hair is often used. The weaved hair tied into the netting is then cut and shaped like a real haircut, or trimmed into a beard or mustache (often on a mannequin head so the actor doesn’t have to sit there for a long period of time). 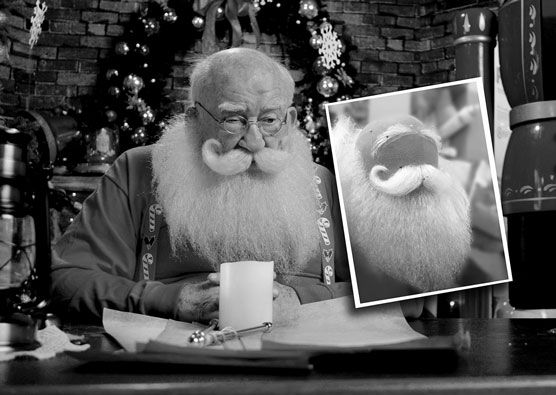