Bending an Ear to Atonal Music

By: Scott Jarrett and Holly Day and
Updated: 03-26-2016
From The Book: Music Composition For Dummies 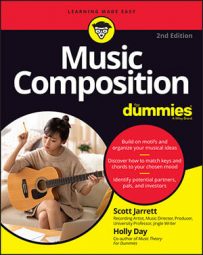 Atonality is a condition of music in which the constructs of the music do not "live" within the confines of a particular key signature, scale, or mode. To the uninitiated listener, atonal music can sound like chaotic, random noise. However, atonality is one of the most important movements in 20th century music. After you realize the amount of knowledge, skill, and technical expertise required to compose or perform it, your tune may change, so to speak.

In tonal music, one tone functions as a sort of center of gravity, and the other tones in the chromatic scale are "attracted" to it in varying degrees of strength. But in atonal music, there is no gravity. You're allowed to use any of the 12 tones in the chromatic scale any way you like. But how do you wrap a sense of form around that amount of freedom?

In 1908, pianist Arnold Schoenberg became the first known composer to write a purely atonal composition. "You lean against a silver-willow" was the 13th song in his musical collection entitled The Book of the Hanging Gardens, op. 15. It was during this time that he first defined a 12-tone system of composition to replace tonality as an organizational tool.

In this 12-tone system, Schoenberg believed that no tone should be more important than another in a musical composition. All 12 tones were to be introduced in an order chosen by the composer. Throughout the composition, these same tones must recur in the same order in notes or chords. No tone can recur until all eleven other tones in the series (or tone row) have recurred.

There were a few accepted modifications to this rule. For example, you could move all the tones up or down by a certain interval, retaining the interval relationships of the original series. You could even go in reverse (retrograde).

You don't have to use Schoenberg's 12-tone system to compose atonal music, and you don't have to write serial music either, but it may be useful to have some framework other than a key center to help you out.

Some composers can hear atonal melodies in their heads just as easily as they can hear tonal ones. This kind of musical imagination is somewhat rare, but if you have it, great! Don't be afraid to get it down somehow. Write it, record it, seal it in a jar. If you think it sounds good and you can communicate it so that others can eventually hear it, it may have a place in the world — no matter how weird it may seem to your relatives.

To hear some atonal music, we suggest listening to any of Béla Bartók 's string quartets or Charles Ives's Symphony No. 4, for starters. These pieces have some tonal and some atonal moments in them.

Don't be afraid to try mixing a little atonality with your tonal compositions to add a little spice.

Scott Jarrett has been a theatrical music director and has taught recording labs, voice, guitar, music theory, and composition. He has worked with artists from Willie Nelson to Dave Grusin.

Holly Day has created work for over 3,000 international publications including Guitar One Magazine, Music Alive!, and Brutarian Magazine. She is also the co-author of Music Theory For Dummies.