Telling a Masculine Noun from a Feminine Noun in Spanish

By: Cecie Kraynak and
Updated: 03-26-2016
From The Book: Spanish Grammar For Dummies 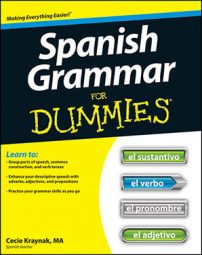 In Spanish grammar, you need to be able to distinguish a noun’s gender (either masculine or feminine) so that you can use the correct gender of any article or adjective that describes it. You can follow some simple guidelines to help you identify a Spanish noun’s gender.

Masculine nouns include the following:

Feminine nouns include the following:

Cecie Kraynak, MA, is a Spanish teacher, ESL coordinator, and author/editor of numerous Spanish books, including Spanish For Dummies. She has taught and tutored Spanish at the junior high school and college levels for more than 25 years.