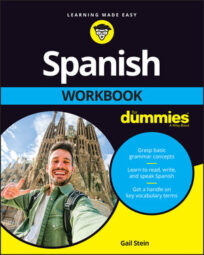 Explore Book Buy On Amazon
Speaking Spanish requires you to keep tabs on all sorts of topics: verb conjugation, irregular verbs, and parts of speech, to name a few. Plus, if you intend to travel, being able to ask for information is a must.

A gerund is usually equivalent to an English present participle — the verb form ending in –ing — and is used in the Spanish progressive tenses.

Spanish gerunds generally follow forms of the verb estar (to be), seguir (to continue [on]), continuar (to continue) and other verbs of motion to show that an action or event is, was, or will be continuing or in progress at a particular time.

A gerund may also be used to express “by” followed by an English present participle.

Forming gerunds of -er or -ir verbs ending in a vowel

You use commands to tell someone (or something) what to do. Remember that the subject of a command is understood to be “you.”

The imperative of regular verbs

When you want to ask for information in Spanish, you’ll more than likely use one of the following words/phrases:

Gail Stein, MA, was a foreign language instructor for more than 30 years and wrote Intermediate Spanish For Dummies.

Cecie Kraynak, MA, is a Spanish teacher and authored Spanish Verbs For Dummies.