By: Laura K. Lawless and
Updated: 03-26-2016
From The Book: Intermediate French For Dummies 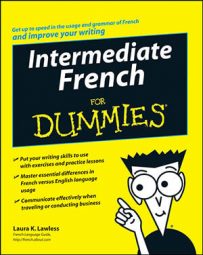 Everyone makes mistakes, but you can avoid many, if not most, of them by paying extra attention to typical problem areas. Following are three things you should avoid doing if you want to write French like a native.

One of the worst things you can do is translate word for word. Some French words have more than one English equivalent, and vice versa, and some words have no true equivalent. And word order is different in the two languages, so you have to keep that in mind when translating as well.

For example, the French word en is both a pronoun and a preposition. As a pronoun, it usually means some, as in J'en veux (I want some), but as a preposition, it means in or to, as in Je vais en France (I'm going to France). You have to think about this difference when translating from French to English to make sure you translate correctly.

Idiomatic expressions, too, can cause trouble. For example, J'ai un petit creux, which literally translates as "I have a little hollow," actually means "I'm a little hungry."

Accents are very important in French. They have several purposes, and leaving one off in your writing is a spelling mistake at best and a source of confusion at worst. Accents help distinguish between homographs — that is, words that are spelled the same but have different meanings. There are hundreds of these words pairs; here are just a few:

Technically, you can leave accents off capital letters; however, if you leave them off anywhere else, it's often as bad as using the wrong letter altogether.

Laura K. Lawless is a French fanatic. From the day she learned her first French words (the numbers 1–10 at age 10), she has been obsessed with the language of love. Her first trip to France, at 15, further convinced her that French would always be an essential part of her life. Laura has a BA in International Studies from the Monterey Institute of International Studies, and she has done graduate work in French and Spanish translation, interpretation, linguistics, and literature. She also studied French at Institut de formation internationale in Mont-St-Aignan, France, and at the Alliance française in Toulouse, France.
In 1999, after a year of teaching French and Spanish to adults, Laura became the French Language Guide at About.com (http://french.about.com), where she continues to create lessons, quizzes, listening exercises, and games for French students and teachers around the world. Her fascination with all things French guarantees that she will never run out of ideas for her French site or books (this is her fourth). Laura has lived in France, Morocco, and Costa Rica, and after scheming and dreaming for more than half her life, she and her husband will be moving to France in 2008.